Who was Mary Anning?

When most of us were little kids playing at recess, we also learned all sorts of fun tongue twisters to improve our woefully slow brain development (Amy struggled with the word "squirrel" for years.) You probably remember this one, a long lisping thing we all learned some version of:

This silly rhyme is the only hint most people have about one of the most important geologists in history. Mary lived in Lyme Regis, England from her birth, the 21st of May in 1799, until her death in 1847. She became the leading expert on the fossils found in the steep Jurassic cliffs (Blue Lias Formation) along the beach which she explored daily her entire life. Her father taught her the art of collecting "curios," which is what people called fossils, and she and her older brother would frequently join their father own fossil hunting trips in order to sell the curios to support the family. The Annings were desperately poor, made only worse by the death of Mary's father when she was only 11 years old leaving the family with unpaid debts and no income. After that point it was up to her and her older brother to provide. 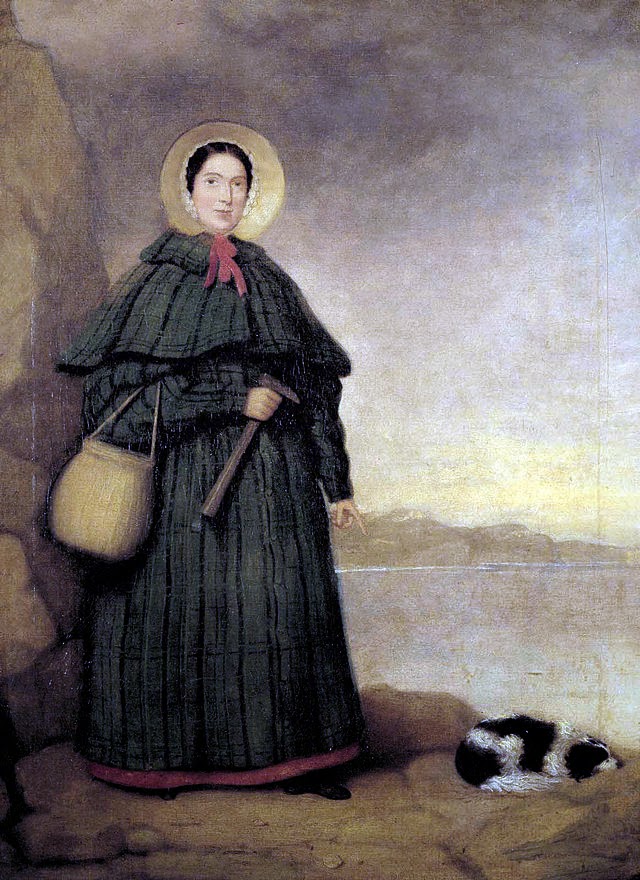 Her brother became a carpenter's apprentice and up keeping the family curio business fell squarely on Mary's shoulders. She explored the limestone and shale cliffs every morning, especially during the harsh winter months when the rough weather triggered landslides that exposed new fossils. She had to work quickly in extremely dangerous field environments to perserve these fossils, and many times she was almost crushed in the rock falls. Her faithful dog companion Trey was killed in a particularly bad landslide in 1833. She successfully found and recovered the first complete Icthyosaur skeleton when she was only 12 years old and news of her skills traveled far. She communicated with some of the best and brightest intellectual minds of her time, such as Charles Lyell, William Buckland, and Richard Owen, yet her name was frequently left out of scientific papers describing her discoveries, she was never allowed to join the British Geological Society, and she and her family struggled financially her entire life. Despite the fact that Mary Anning found some of the first and best fossils of Ichthyosaur, Plesiosaurs and Pterosaurs, she is best remembered as the sea-shell peddler in a children's poem.

Obviously, this upset the Vengeance Team just a little.


Lady Harriet Silvester, the widow of the former Recorder of the City of London, visited Lyme in 1824, and described Anning in her diary:


"The extraordinary thing in this young woman is that she has made herself so thoroughly acquainted with the science that the moment she finds any bones she knows to what tribe they belong. She fixes the bones on a frame with cement and then makes drawings and has them engraved... It is certainly a wonderful instance of divine favour—that this poor, ignorant girl should be so blessed, for by reading and application she has arrived to that degree of knowledge as to be in the habit of writing and talking with professors and other clever men on the subject, and they all acknowledge that she understands more of the science than anyone else in this kingdom." - Carus, C.G. (1846), The King of Saxony's journey through England and Scotland in the year 1844, Chapman and Hall.


So why, if Mary was so astute a paleontologist, and so excellent at finding fossils, is she not better known? The reasons are varied, and all are shitty, but chief among them are the fact that as a woman, she was not eligible to join the Geological Society of London and she did not always receive full credit for her scientific contributions. Mary Anning was a genius without credit, a fate that many women suffer. We here at Vengeance Team headquarters feel it is our duty and calling as female paleontologists to stand up, not just for Mary Anning but for female scientists everywhere. It is our goal to educate our readers about Mary Anning and other fantastic and underrepresented women in science.

Mary once wrote in a letter that "the world has used me so unkindly, I fear it has made me suspicious of everyone." The Vengeance Team is going to make sure that not only does this not happen to them, it doesn't happen to others. Part of our mission is to celebrate women in science, by posting about their works and their trials, and to encourage other women to participate in STEM fields. Mary Anning has long since passed, but by being female paleontologists too loud, too strong, and too talented to be ignored, we will make sure her legacy continues.

To learn more about this incredible lady, we recommend these two books: Remarkable Creatures: A Novel by Tracy Chevalier, and Jurassic Mary, a biography about Mary Anning by Patricia Pierce.