Some non-human primates have punk-rock peckers, embedded with barbs that make sex like literally scouring the drain, to get rid of sperm and discourage further mating. These primates, including marmosets and some prosimians, have "penile spines" which are exactly as unpleasant as they sound.

We imagine this is the primate anthem in those particular species.


Fortunately for all concerned, humans don't have that. Evolution has kindly steered us towards smoother, larger penises. Of course this isn't exactly altruism on Evolution's part - these smoother schlongs are a great fit to remove unwanted swimmers of previous tenants, without the internal road rash issues of early primate editions. How did scientists test this theory?

Essentially, they found that the coronal ridge (head of the penis) is important in getting sperm out of a vagina. They also combined data with a psychological study which showed that college-aged men tended to "involve deeper and more vigorous penile thrusting" during sex when they believed their girlfriends had cheated on them. AKA, they boned their ladies harder in order to clear out more frat boy spunk. SCIENCE. Seriously, go read this article. It's worth it for the equations alone.

This will be our last post on the topic of genitals for a while. It's not that we can't count, it's just that our search histories are literally starting to make our eyes blister and our souls melt, and we can't sustain that sort of inner horror.  We'll be back in a week or two, and spend at least a little time talking about something that isn't sex. We didn't quite make it 14 days, but we made it til the 14th! Happy Valentine's day everyone, now go enjoy some barbless boners!! (Or whatever you prefer...)

I’m sure we’ve all been there. You’ve had the significant other who’s a little needy and can’t stand to be away from you for more than five minutes at a time, or the moocher who wants to crash on your couch all day dressed in nothing more than their underwear and dorito detritus. Maybe you, too, have woken up to someone who didn’t seem quite so bug-eyed and scrawny in the dark. The only thing worse than one of these is, well, all three of these at once.

Such is the curse of the female deep sea anglerfish.

That cute little flesh nugget there on this handsome lady’s belly is her mate. He’s basically useless; male anglerfish are full-on parasites, with their entire circulatory system looped into that of the female. All they contribute is sperm and backseat driving. Even worse, sometimes female anglerfish can have more than one boy toy attached at a time. While the Vengeance Team definitely applauds the innovative adaptation of polyandry, given that these particular men neither clean the dishes nor offer much in the way of conversation, we’ve really only got one thing to say to our fishy friends:

Have you considered parthenogenesis?

Posted by Mary Anning's Revenge at 10:11 PM No comments:

Email ThisBlogThis!Share to TwitterShare to FacebookShare to Pinterest
Labels: 14 days of genitals, adorableness is in the Aye-Aye of the beholder 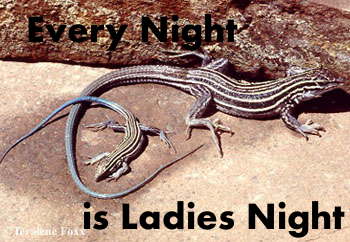 What, not impressed by an animal that will bite off its own penis in an attempt to break up with you, or a penis that can high five? Well, how about an animal naturally equipped to do the helicopter / open a bottle of wine?

Why have a dick shaped like a knock-off of the elder wand? Sperm competition!

See, lady ducks have a corkscrew-shaped vagina, so gentlemen ducks have to have a similar shape to, erm, scrape out the sperm of previous mates, as it were. Corkscrew cocks aren't just found in Ruddy ducks, but in many different paternally-invested waterfowl. Apparently if you're going to invest all the time in raising that chick, you want to make sure it's yours to begin with.

Well, to put it bluntly, humans have it easy.


Caecilians (which are a weird amphibian group that look like legless, massively-uglier salamanders with a permanent sad face) have two life strategies which both really suck for mom. Version A: live birth, with several embryos in the female's tum-tum at a time. This gets really crowded since those babies are often more than half the length of the mother's body. Plus, when they come out they look like this:

...which is never a pleasant surprise. That's the Vengeance Team's working theory as to why caecilians are mostly blind. btw: sadness-induced self-harm. But what's even worse is what happens before they come out all wriggly and hideous (a several hour ordeal you can youtube at your own leisure). In the womb the baby caecilians use their specialized teeth to scrape away the nutrient-rich "uterine milk" that is produced in the lining of their mother's uterus. Scientists also found bits of the uterus itself in the stomachs of dissected embryos. That's right,  they go for more than just milk, they literally eat part of their mother's organs.

Version B is also a terrible option, which involved reproduction through eggs. Sure, with eggs  nobody's eating you from the inside out, but the commitment of the caecilian mother prevails: for a week after they hatch, the mother will cuddle her little deviant hellspawn as they periodically swarm over her and EAT HER SKIN. And we thought breastfeeding was weird. 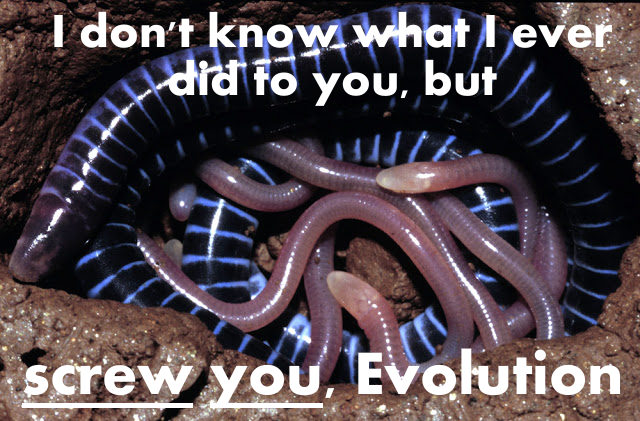 Posted by Mary Anning's Revenge at 8:48 PM No comments:

Email ThisBlogThis!Share to TwitterShare to FacebookShare to Pinterest
Labels: 14 days of genitals, never ever breeding

Vertebrates aren't the only ones with strange ding-a-lings. Slugs are hermaphrodites with penises as long as their bodies, and that's only the tip (heh) of the iceberg of insanity. The following documentary describes their mating rituals in detail, and in the voice Meaghan's always sort of imagined a slug having - that of an awkward-ed out teenage boy. Skip to minute 2:30ish if you're just interested in the way things with no bones, well, bone.

Email ThisBlogThis!Share to TwitterShare to FacebookShare to Pinterest
Labels: 14 days of genitals

#2: Prehensile Penises
And to follow up a post on dicks that look like hands, here are some other ding-a-lings that could be confused for palms!
Turns out that dolphins and whales have extremely large, prehensile peckers that can explore all sorts of fun nooks and crannies, including hands! Flipper's little Philip is quite lonely and aggressive, too. One study on dolphin and swimmer interactions recorded 13 out of 29 dolphins had periods of misdirected sexual behavior towards buoys, vessels and humans. So next time you wanna go swimming with dolphins make sure you don't wave 'hello' too vigorously...

African elephants, not surprisingly, also have absolutely gigantic male appendages! Not only are they impressive in size, but also function. These prehensile peepees literally sub in as a third leg. Let's take a moment to check out the life of a male elephant:


Belly itch but no fingers? Not a problem, I've got a built-in belly scratcher!
Tired of standing on my own feet? Just use my giant slong to take a quick breather!
Bugs buzzing all up in my bizniss? Swat 'em with that evolutionary fly catcher!
Hot momma over by the watering hole? Wave hello AND impress at the same time! 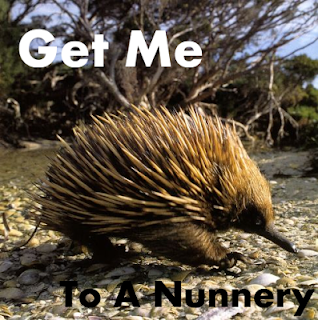