The Glories of Collections-Based Research

Whenever I (Meaghan) tell other people that I'm a paleontologist, people tend to get really excited and ask one or both of the following two things:

First they ask if I've heard about the newest dinosaur fossil, which I never have but usually can bluff my way through with the sentence "oh right, isn't it the biggest one they've ever found, and it's from some country in South America or Asia or Africa or something?" because 90% of what dinosaur paleontologists in the media do is basically a prolonged, scientific dick-size competition that occurs in a foreign country my American friends consider jungle-ish.

The second thing they ask is if I get to do much field work, to which I throw back my head and cackle maniacally until the happy, excited gleam in their eye fades away and leaves nothing behind but the shallow husk of their dying inner seven-year-old.

Because no, I don't, and it's totally way better that way.


See, field work is awesome. You get to be outside in the sunshine, hit rocks until they break, and generally feel like a total badass. Field work is also terrible, because you spend hours in the soul-baking sun (or snow, or rain, or whatever card the weather deals you that day) and often don't find jack-shit, and what shit you do manage to find becomes a year-long prolonged process of anticipation because it takes so long to prepare it and find out whether you have the femur and the entire skeleton of a rhino, or you have the head of a femur of a rhino and a whole bunch of once-promising dirt.

If field work is like putting on a blindfold and sticking your hand into a jar that contains a couple of pieces of candy hidden amongst 7 half-rotten pickles and two pirhanas, then collections-based research is like going into a candy store where everything is free and already unwrapped for your eagerly salivating mouth. Sure, it lacks the thrill of finding the candy amongst the rotten pickles, but it's got guaranteed good results.

I spent most of the month of May at a couple of collections on the East Coast. For a lot of people, that sounds like vacation, when really it's a whole hell of a lot of work. So what exactly AM I doing when I tell people "oh, I spent my entire summer in a windowless room staring at dead animals!"

Most of what I'm doing in those rooms is taking pictures... lots and lots of pictures.

I'm creating 3D models using a program called Agisoft Photoscan. These models let me measure things and examine 3D morphology, as well as create a very quickly accessed visual library for myself. Currently my research is focused on oreodonts, and a couple of modern animals that have bits and pieces of anatomy that sort of lines up with oreodonts. Because oreodonts don't have modern descendents, and have some weird morphologies like really terrifyingly big cheekbones and funny depressions in their skulls, I'm basically stitching together a zombie animal from lots of different modern animals to understand variation. That's why when people ask me what an oreodont is, I tell them it's sort of related to a camel but has big piggy cheeks and short piggy legs, but teeth like sheep, but also with fangs, and sort of had faces like some antelopes you've never heard of.


The 3D photography stuff is a great technique, because it takes about 15 minutes per specimen and I need to look at a LOT of specimens, in a LOT of different places. Being able to move quickly and do my measurements at home is saving me a lot of time and money. For example, if I really want to understand oreodonts I need to look at what are called "Holotype Specimens." These are the first (or if I'm lucky, the best of the first) examples of that fossil which someone described a new species of. There are well over 200 type specimens, but because the internet wasn't invented when many types were being described a lot of people thought they had something new and named it a new species... even though it really wasn't. It's kinda hard to know that for sure if I don't get to look at them, and these things are stored at museums all over the country.


In addition to looking at skulls, sometimes I also find some really strange things in the collections. I've got a few photographs of these hidden gems that I'd like to share with you now. Finding weird stuff like this always makes a long day of playing Austin Powers with a bunch of dead animals ("Work it baby, work it!") totally worth it.

First off, let's take a look at this mount from the MCZ. 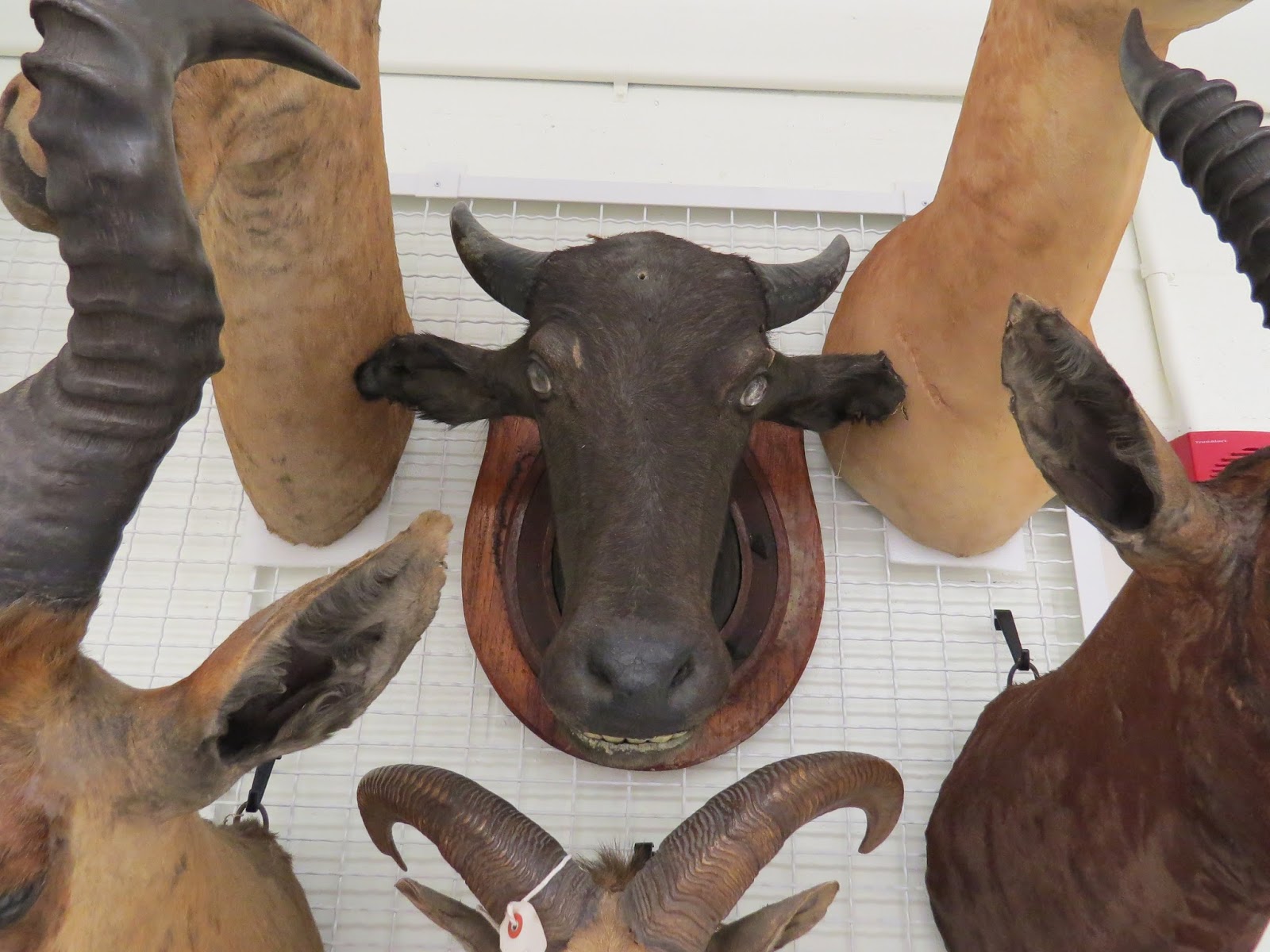 This thing was directly behind me as I worked in their collections for 2 weeks, grinning maniacally. For TWO WEEKS. Super reassuring.

Or how about the note I found shoved into the eye socket of this Vicuña skull, with no explanation or alternative identification?


Sometimes specimen tags include bits of information that are particularly interesting. Once, I found a sheep at the AMNH that had the most unique locality data I'd ever seen. Usually these things refer to the general area of Canada where they collected that specimen. This one read "found hanging in the South Hall." I wonder what the genetic diversity of the South Hall is like?

But my very favorite hidden gem to date is this statue I found in the collections at the Yale Peabody Museum, hidden on a top shelf and just grinning at me. This is a life-size replica of Merycochoerus proprius, which is an oreodont, and whenever I am panicking about my dissertation and thinking about quitting I'm going to look at pictures of this beauty and think "Y'know what? Oreodonts are worth it." 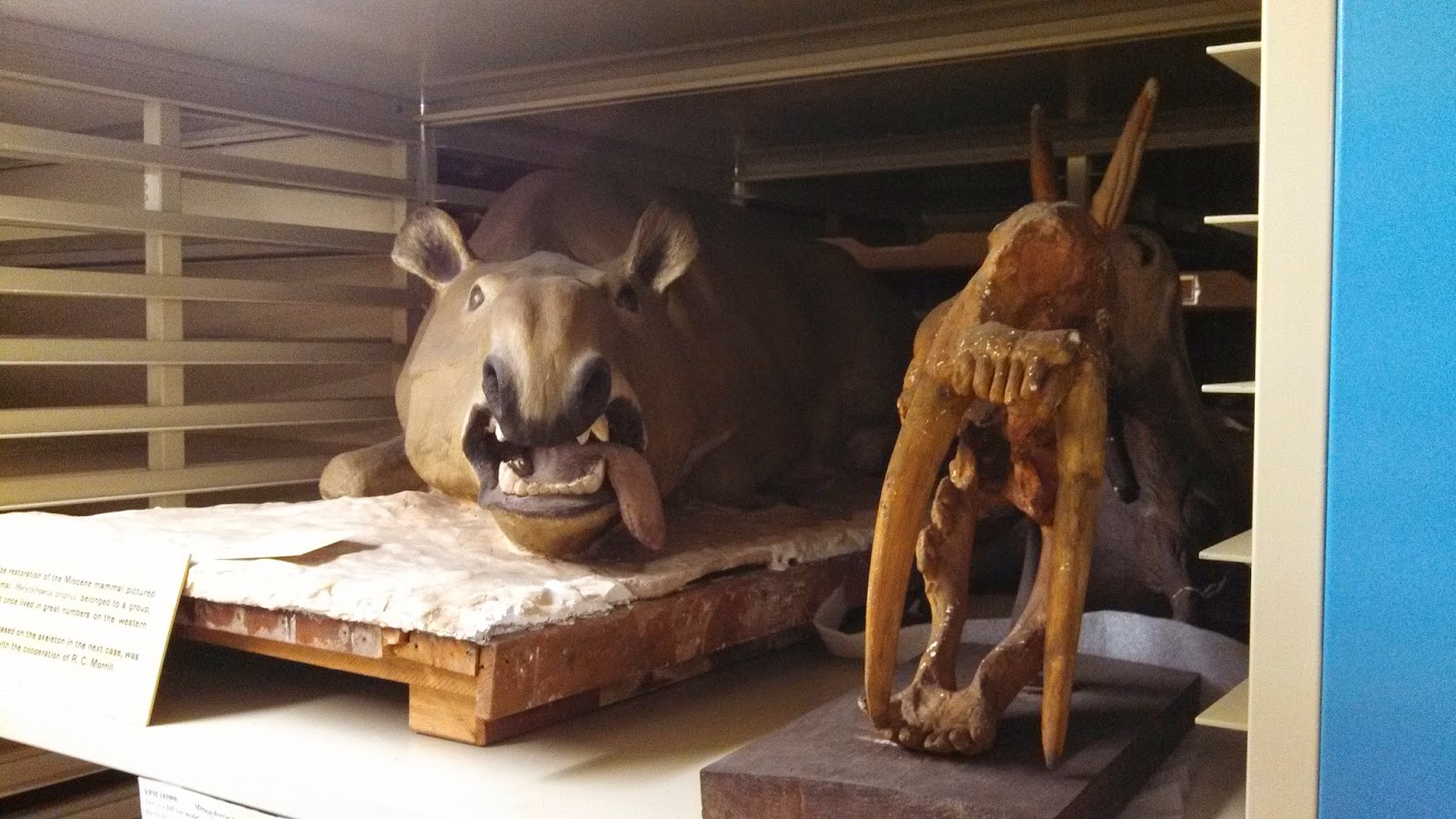 No animal this awkward should have to go unstudied.
But don't worry, oreodonts.
Meaghan's gotcha. 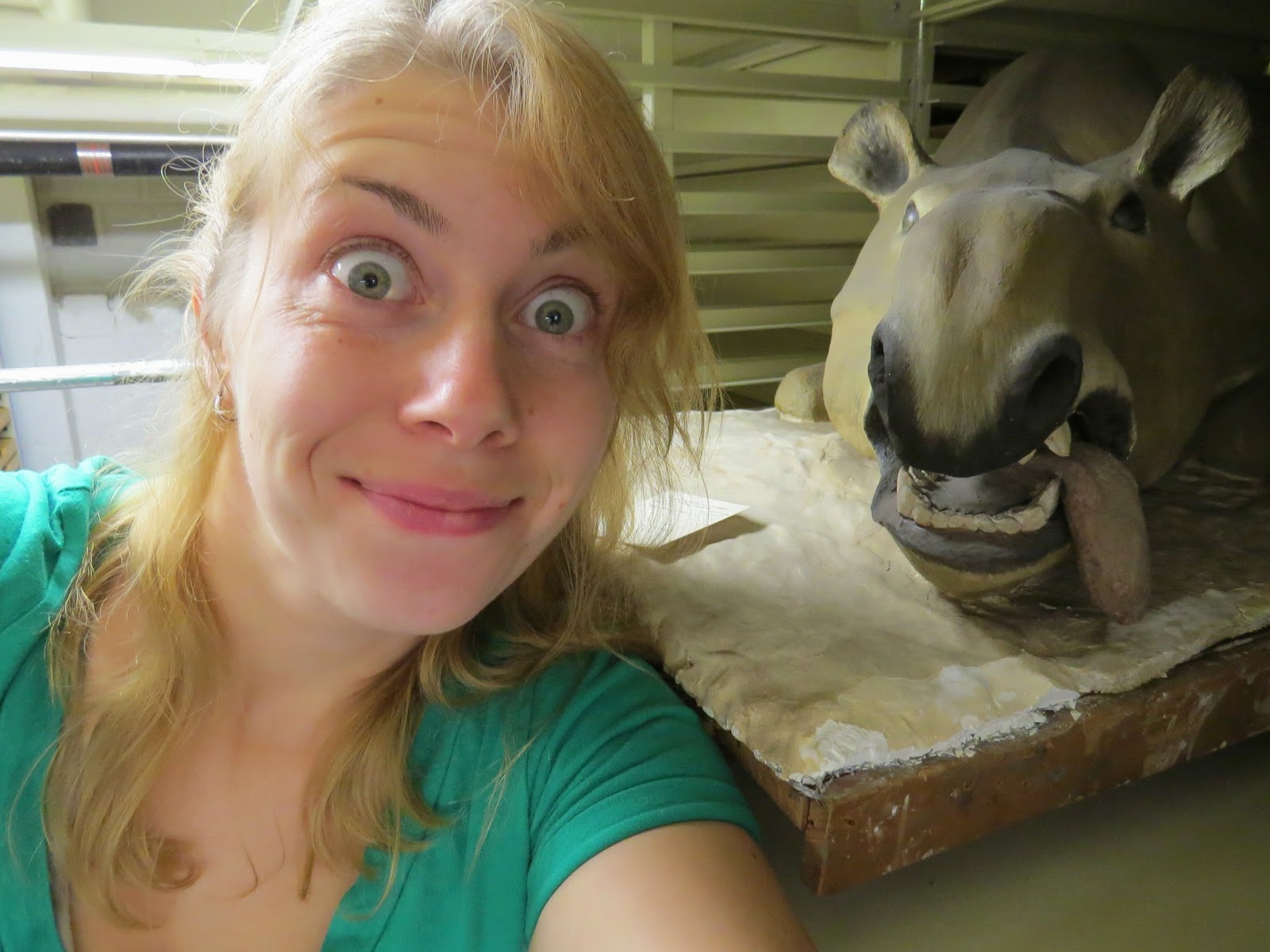 
*This photograph is of @ghinding, who if you don't already follow her on twitter you should if only because I make a lot of jokes at her expense and they're all worth a read.

Email ThisBlogThis!Share to TwitterShare to FacebookShare to Pinterest
Labels: Amy and Meaghan Are Basically Better Than Everyone, best fossil hunter EVER, field work, oreodonts, The Reign of Meaghan