An Introduction to the Vengeance Team


To understand this blog, there are three people that you have to be introduced to: Meaghan Emery, Amy Atwater, and Mary Anning. Let’s start with the ones that aren’t dead, because they’re the most exciting.

Amy Atwater and Meaghan Emery have known each other since before anyone admitted that Amy was just never going to grow into her nose. At the time, Amy was a camper at the Oregon Museum of Science and Industry’s Science Camps, while Meaghan was a counselor, sneaking off to get into trouble with Amy’s brother (who also sports the family beak). 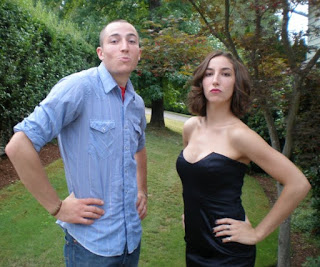 Without the hair cuts, differentiating them is nearly impossible.
Meaghan later provided Amy with a snake she had raised from the egg, and their friendship fate has been sealed ever since that snake slithered into Amy’s possession (and promptly into her step-mother’s care, where it is now used to make house guests feel uncomfortable). Please note, both Amy and the snake’s bodies will be donated to science. Meaghan plans on never dying, so that’s a moot point.

Amy grew up a bit, while Meaghan came to terms with the fact that she never would and promptly began lying on all of her driver’s licenses. Today, they live together. They found each other once more at the University of Oregon where they learn about fossils and rocks. Meaghan is a first-year masters student while Amy is a senior doing original research on the cutest fossil mammals, Omomyids. Meaghan unfortunately has chosen the paleontological cow-patty minefield that is Oreodont taxonomy and diversity.

Mary Anning, meanwhile, is still dead. Hopefully, if things go well, she’s fossilizing as we speak. In the early 1800’s Mary Anning found the first complete plesiosaur, the first British pterosaur, and she and her brother found the type specimen for ichthyosaurs. She was one of the most prolific paleontological collectors in history, and she spent most of her life on the beach scouring it for fossils to sell. She was an expert in the Jurassic Age marine sediments of England, and despite a lack of education or money produced many compelling pre-Darwinian ideas as to evolution, ecology and morphology of these organisms. The paleontologists of the day were wealthy, white men; she was well known amongst them for finding fossils and understanding their shape and function. Despite this, Mary wasn’t given credit for much of what she found or described. She was rarely published, and many of her ideas were stolen by the male paleontologists of the day. It wasn’t until long after her death that most of her many contributions to paleontology were recognized.

Things are getting better, but they aren’t yet fair: out of the 19 professors on staff in the Geology Department at U of O, only 5 are female, and only 1 of them is a full-time Geology faculty member. Country-wide, women still make less than men in the same jobs, performing the same tasks. Sometimes it’s easy to forget this, or to sweep women into binders without much thought. Our culture doesn’t help – women are told throughout school that they’re not as good at math, not as good at science; they are told that their voices and opinions aren't as important. Whether these messages are overt or subtle, the sad fact is that it's 2012 and they still exist.

Fortunately ladies, Meaghan and Amy are here. We're intelligent, charismatic and unsurprisingly pretty good at math. More importantly, we’re very, very noisy. Ask any of our professors: we’ve got a lot of things to say (and nobody comes to your office hours anyway so that's not an excuse for cutting our post-lecture discussion off before we're finished, ugh!). In a time when male politicians are vomiting their stupidity all over the news, Amy and Meaghan are stepping forward to cough out opinions of their own (obnoxious, amazing, and otherwise).

We are female, we are scientists, and we refuse to be ignored.  We are Mary Anning’s Revenge.
Posted by Mary Anning's Revenge at 5:21 PM