Sometimes, we find really messed up things kind of adorable. Here are some hauntingly cuddly things that will make you question whether you're a really bad human being, or just really accepting

1) Bat Embryos
Yeah, we know, that sounds gross. But the truth is, they look like pale squishy jelly-beans wearing a bow tie, which is way better than it sounds. Sure, they also bear a strong resemblance to what kept coming out of Meaghan's body last year when she had those nasty sinus infections, but Bat Embryos still seem to rock it. What's even better about these things is that as they grow older, they go through the stages of the three wise monkeys!


2) Baby Stingrays
Ok, we want you to envision what it would be like if an aquatic pancake had a smile and wanted to cuddle you, and also was an animal. Have you got that mental image in your brain? Good. Well, it's real. This guy is full-on ready for snuggle time. Those adorable pink nubbins are its itty-bitty pelvic fins, by the way, and the "eyes" are actually its nostrils, but that doesn't matter. What does matter is that these guys are prepped to hug-launch themselves at you, and they tend to hatch en masse: hug party, anyone? Too bad they grow up into viscous beasts who stab your favorite celebrities (literally) in the heart. 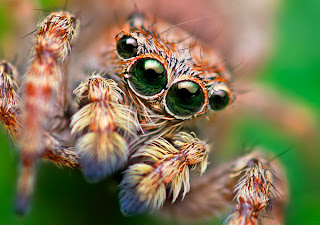 They're fuzzy, they're small, they're rambunctious - jumping spiders are the Ewoks of the arachnid world. Sure they have beady eyes and are venomous - but their chelicerae look like two velvet-encrusted pillows made for miniaturized nap sessions!

Plus, their fuzzy little faces are just begging to be memed. Yes, little buddy, yes it is can be.

Cute on the outside, but feels less cute on your insides: yup, that's Giardia alright! This is the little bugger responsible for Beaver Fever, aka "poop-my-brains-out" disease. The dark "eyes" are the double nuclei of the protozoan, and the devilish smile is the "median body," the purposes of which are scientifically unknown but in Amy's unscientific opinion may only exist in order to taunt its victims. Depending on your perspective, our handsome little hanger-on here is wearing either glasses or what Meaghan likes to call "hangover eyes," but either way that little raccoon mask is a sucking disk that allows this cheerful chap to attach itself to the epithelial cells of the intestine.

To recap: Giardia is so cute that it sucks onto your intestinal wall with its eyes. It gives you eye kisses. As our resident expert, Amy, how does it feel to have Giardia give you eye kisses in your tum-tum region? 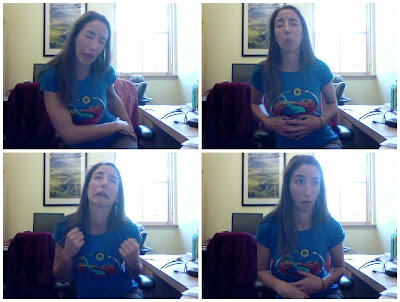 5) Jerusalem Cricket
Some may call them Satan's Fetus, but we think these little hell-bugs are cuddlier than most newborn children! It's a puffed up cricket wearing Georgia Tech colors, and with that big ol' butt (best twerkers in the animal kingdom?), there isn't anything unadorable about these little guys. Except for their faces, that is. On second glance, it appears to have feet made of chicken combs, and is wearing a cape made of a flayed earthworm. Hmm.. maybe it's the "pink fairy" name that's subconsciously luring us to believe this thing is cute... naw, just look at it! It totally just wants to cuddle! (And then maybe rip your throat out and wear it as evening attire).


Ugh, WTF Guys, I Feel Dirty Now For Finding These Things Cute
Though the above organisms may not fit the standard bill of "cute animal," we are still drawn to these organisms because of certain cute aspects that humans tend to pick up on. Take Giardia, for example: it's got the proper erm, 'head' proportions, all big ol' noggin and giant eyes. Head size and shape has a lot to do with what we think is cute, which is why we think freshly-harvested human fetuses are appealing despite looking like wrinkly, screaming bobble-head dolls. This is largely in part to their heads being proportionally large for their bodies (Alley 1981); and as they get older and grow into their bodies, perceived cuteness decreases.

But guys, you're whining, most of these things had beady eyes and tiny heads! Sure, but the human instinct to find animals cute can also stem from a place of superiority. When we call something cute, that tends to associate the object with thoughts of meekness, tenderness and sympathy. Determining cuteness communicates more than a simple "awwwwww" but also implies  power play, and combines weakness, submissiveness and humility with influence, domination and control (McVeigh 1996). This probably explains a lot of things, like the popularity of hairless cats: inherently ugly, yet somehow so appealing.

It also explains why your mom likes you so much.

Do you like conventially hideous yet surprisingly adorable animals? Well, this blog is full of that sort of shit. Friend us on facebook, or twitter, or that other social network, what's that called, we always forget - oh, right, google +! That way you'll get updates, plus extra content that we work for at least 30 seconds on preparing for our social media accounts. Each has its own gem of a "read this please" joke, so feel free to follow us on all of them to truly watch our comedic genius. Remember, the more popular we think we are, the more likely we are to write more content, and everyone knows that the true measure of popularity is how many people like your facebook page.
Posted by Mary Anning's Revenge at 8:26 PM

Email ThisBlogThis!Share to TwitterShare to FacebookShare to Pinterest
Labels: adorableness is in the Aye-Aye of the beholder, naturally selected for cuteness, pink fairy armadillo is the best euphemism ever