Paleontologists Give the Best Presents

Last year, Meaghan made epic personalized nerd mugs and fake tattoos for her lab mates. It was a great Christmas - she got to not be poor AND be smug, which is a difficult combination to come by. Naturally this year, she wanted to outdo her previous year's efforts and come up with something crafty and sciencey that could solidify her position as the Martha Stewart of Science. Fortunately for Meaghan, there exists such a thing as "Non-Toxic Food-Grade Silicone Paste." 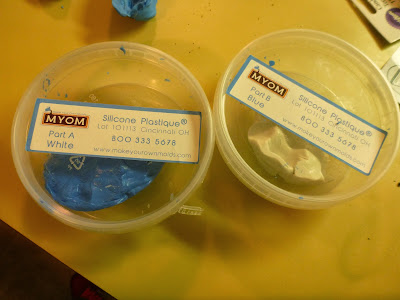 This is a little different from the typical casting supplies that paleontologists work with, in that it is meant for eating and is incredibly easy to use. Select or make the item you would like to mold, mix equal qualities of blue and white, and smoosh the mixture all over the item for about an hour. Boom. Silicon molds.

Initially Meaghan had grand plans of using the new 3D printer at University of Oregon to print out mini replicas, but they have some daft rule about "academic intentions" and she couldn't figure out how to bullshit her way through it. Instead Meaghan made small sculpey clay replicas of an oreodont skull, and a flat medallion of a Dunkleosteus head, and a flat giant ground sloth. She also grabbed a bear skull that was just lying around (long story).

Pro Tip: Wash your bear skull before you mold it. We don't care if you washed the hell out of it last year, Meaghan, wash it again or you're going to get bits and pieces of dirt stuck in... aww damnit, Meaghan, COME ON!

Pro-Tip: Yeah, okay, so you didn't wash that bear skull like you were supposed to. Fine. At least by doing your first trial run with white chocolate, you A) pulled the remaining filth out of the mold and onto the chocolate and B) could see said filth. Discard those chocolates. Re-scrub mold. Feel shame. (Yes, Meaghan threw them away and cleaned the molds again. Calm down. She's not that mean.)

Silicone molds are pretty resilient - you can put them in the oven at up to 450 degrees Fahrenheit, and you can freeze them, and they're fine. So the next step was lollipops. Meaghan made a bunch, including a batch with bacon grease because it smelled like it would be a really good idea. Look, what sort of flavor would YOU put in a lollipop shaped like a bear molar? It only makes sense. Also, Amy's boyfriend had just cooked a bunch of bacon, and Meaghan was inspired. She followed one of the 13,000 lollipop recipes and then at the step of "add flavoring" she added bacon grease instead!

Pro-Tip: Pure bacon grease tastes like grease and not in a good way. Filter it so it's got lots of bacon bits in it too, that's the good stuff. Or alternately, just put bacon bits in it, since the bacon grease itself makes the lollipop sort of greasy too, and then later that grease seeps out and you find congealed pink bacon grease on your wax paper, which is hella disturbing.

Pro Tip: When making your molds, make them FLAT on the top so they stand up nicely rather than rocking around like they're possessed and their only goal in their shitty inanimate lives is to spill molten chocolate or candy everywhere.

Package all that up in some Christmas-themed plastic bags you found at Fred Meyer and look, candy inspired by science! Christmas is saved!
Posted by Mary Anning's Revenge at 7:48 AM