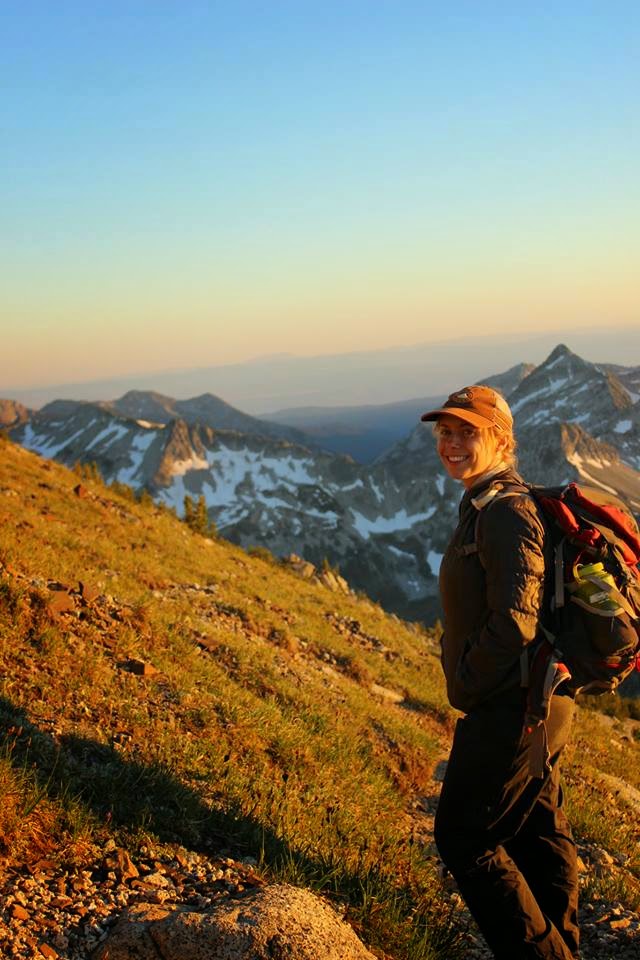 Spending a summer in Dayville, Oregon, probably doesn’t sound like much of a career-advancing opportunity unless you study obscure small towns or farming (or fire – we had lots of those). It’s deep in Eastern Oregon, so deep that it’s a 30+ minute drive if you want more than the canned beans and melted men’s deodorant the only store in town has to offer. The population is 145, but the age distribution is akin to a teetering, inverted triangle - I saw an order of magnitude more rattlesnakes than I did people under the age of 35. But Dayville is home to much more than cows and near-retirement ranchers: it has huge exposures of millions of consecutive years of fossil-forming layers of the Cenozoic and is a 15-minute drive from the world-renowned John Day Fossil Beds National Monument. As a paleontology doctoral student studying Cenozoic mammals, there’s no place in the world I’d rather be located (also, I conveniently like rattlesnakes).

My job this summer as a Geocorps Paleontologist Intern at the John Day Fossil Beds National Monument (JODA) was two-fold. The first part was to identify the oreodonts (superfamily Merycoidodontoidea) in the collection and help redefine their biostratigraphy. This was an important task: over a quarter of the cabinets of the John Day Formation fossils here are dedicated to oreodonts, and almost none of these oreodonts had valid identifications. For those of you familiar with this blog, oreodonts are kinda my jam, and also my bread and peanut butter - they're what I'm studying for my dissertation, and they are phenomenally important parts of North American Cenozoic ecosystems. For researchers looking at paleoecology of the park, or for identification of future material, it's really important that there is correctly-identified material for comparison and further research.

My second job for the summer was to learn more about the rocks they came from and the methods that helped extract them – I did field work once or twice a week and usually spent a few hours a week in the lab prepping oreodonts for study. Essentially, my task for the summer was to work on a research project closely aligned to my dissertation topic, and to learn more about the career I am preparing to enter (a pretty fantastic deal, if you ask me).

I started right away by throwing myself into the task at hand: we had tons of oreodont skulls and bits, and I was going to identify all of them. At first, this seemed like the best task I had ever been given; I took my comprehensive exams last February and getting to actually do the science I had been preparing for all year was fantastic. I was given free reign of the collections vault, surrounded by beautiful skulls and free from the distractions that school/WI-fi access provided. To put it in terms of a Dayville-esque metaphor, I was as gleeful as the numerous local stray cats I kept feeding my roommate’s expired half-and-half to, all full of purring, flea-bitten enthusiasm.

Eventually though, even the expired half-and-half of life must run out and I realized that while I had seen many, many Eporeodon occidentalis in the collections, I had not seen a single Eucrotaphus trigonocephalus. A feeling of unease came upon me, much like the intestinal distress probably striking all the neighborhood cats post-expired half-and-half. I had spent many weeks previous to my arrival at different museums taking pictures of oreodont holotypes (my dissertation does involve oreodont taxonomy and variability, after all), but though Eucrotaphus trigonocephalus was ONLY FOUND in the John Day Basin it hadn’t turned up. How, exactly, had I missed it?

I looked at the type, and at the descriptions of my predecessors, and found that while many of the skulls in the John Day Fossil Beds collection shared characters with the described species, none of them looked quite like the holotype. In fact, for every single character listed as diagnostic of Eucrotaphus trigonocephalus, I could find it in a specimen that also had characters diagnostic of Eporeodon occidentalis. I spent a lot of time reading about very specific portions of bone and trying to find new characters to distinguish the two taxa. I read an entire 17 page paper on the foramen ovale (absolutely riveting, HAHAHAHA GET IT RIVETS ARE ALSO HOLES).

In the end, my boss suggested that instead of endlessly whining that all of these morphologies weren’t discrete, I should run a phylogenetic tree on my individuals and see if they actually lumped together in any meaningful fashion. I coded 45 individuals of Eporeodon, Eucrotaphus, Promerycochoerus, Hypsiops, Merychyus, Paroreodon, Oreodontoides, Agriochoerus and Camelus, and tossed it all into Mr. Bayes like I was chumming the water for polytomous sharks. I think I may well be the only person who’s ever given a gleeful cackle and smacked their hands together at the sight of a failed phylogenetic tree, but Mr. Bayes gave me exactly what I expected: everyone else seperated and there was a gigantic polytomy of Eporeodon and Eucrotaphus.

For those of you less familiar with what a polytomy is, it is the phylogenetic equivalent of a pile of unsorted vomit: it tells you that your characters fail to distinguish any evolutionary difference between the individuals in your study. In fact, even if I cut the characters I thought were variable the two taxa still lumped all together into one big mess. Combine that with the fact that the sizes were well within the range of modern variation and I was convinced: there was actually one genus, one species, not upwards of 3 genera and 10 species.

Many people find taxonomy tedious and unexciting, and despite the numerous feral cat references in the preceding paragraphs it might be easy to find my description of the bulk of my summer similarly so. After all, what I did with Eporeodon occidentalis is also what I did with Promerycochoerus superbus (3 genera and 9 species was actually just one of both). I also learned that our species of Hypsiops is quite likely a new species or MAYBE HAS RAMPANT ARTHRITIS, and spent a lot of time grumbling about how confusing baby teeth were. But here is the important bit, the part that makes all the endless irritation associated with naming things worth it: I found that there were only 10 species of oreodonts in John Day – about a quarter of the number that had been described from there historically. That is a tremendous drop in perceived diversity.

Let’s put it into Dayville terms: if I told you we had 6 different species of small feline predator living under the Dayville Mercantile that would be incredibly exciting. Biologists would flock to study what sort of habitat could hold 6 entirely different species of extremely similar carnivore living simultaneously. Of course, that isn’t the case here – feral house cats and maybe a skunk or two are all that live under Dayville’s only store. This is not a surprise, nor a revelation – it is a pretty standard reflection of what carnivore diversity out in Dayville should look like. Understanding how many oreodont species there were in the John Day Basin is perhaps less exciting for modern day felid-enthusiasts, but still fundamental for conducting other scientific pursuits: was the John Day Fossil Beds a hotspot of herbivore diversity, or was it pretty standard?

Having a functional concept of what a species is in the fossil record is also absolutely vital to understanding diversity changes over time. I found that Eporeodon occidentalis makes up 84% of the oreodont specimens found in the Lower Turtle Cove, which is the chunk of rock before an enormous eruption called the Picture Gorge Ignimbrite. That is an incredibly high proportion, made all the more dramatic in the way that it completely nose dives after this eruption, down to only 35% of oreodont specimens. Oreodont abundance in comparison to other herbivorous taxa doesn’t change during the upper Turtle Cove member, which means we’re seeing an incredible change in the dominance of this single species. There is also an enormous size component to this change: lower Turtle Cove has 95% mid-sized oreodonts, but upper Turtle Cove has more of the members of the enormous and small oreodont species, indicating that oreodonts began occupying different size and possibly ecological niches.

This summer was an exciting adventure in taxonomy (a sentence never before uttered), but Dayville  offered a lot of personal opportunities as well. I’ve spent a lot of evenings hiking or climbing in Black Canyon Wilderness area or on the monument itself. I climbed to the top of Sheep Rock up the wrong side, and came back down the correct one (with Amy!). I went backpacking with fellow Geocorps intern Gabriel Hinding and marveled at the granites of the Wallowa Mountains. I stood on Cretaceous conglomerates and talked endlessly about standing on reject dinosaur gastroliths. I collected the fossils of oreodonts, hypertragulids, gophers and mice. I got to watch helicopters carry buckets of water over my house to put out nearby fires (on multiple occasions - like I said, there was a lot of fire this year). Dayville itself, tiny, hidden town that it is has handed me some amazing rural-America cultural snapshots, from living at the back of the one store in town in a building decorated internally with shingles, to having my backyard turned into an RV park of incredibly friendly cowboys who were fake-robbing the Dayville Mercantile during the 4th of July melodrama.
On the face of it, Dayville might seem like a strange, out-of-the-way place to spend the summer. In actuality, I made huge leaps in my understanding of my dissertation topic, learned methods for preparation and fieldwork habits that I will use for the rest of my career, and made life-long friends and scientific collaborators. That’s a lot to accomplish for three months in a town with only 145 people – and none of it would have been possible without the Geocorps program. Thanks Geocorps!

New Geocorps positions for next year are posted, and they are super awesome. Amy and I suggest you apply.