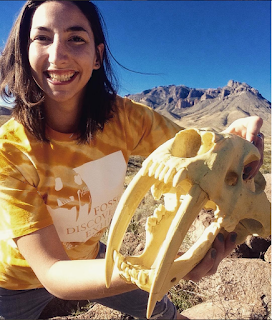 Last summer was a busy one for the Vengeance Team. Meaghan completed her PhD, got married, and got the most adorable puppy on the planet. Amy crafted the shit out of Meaghan's wedding, mostly didn't cry, finally appreciated sheep (kinda) and then spent the rest of her summer working as the paleontology intern for Big Bend National Park in west Texas. Since we're paleontologists time as we mortals experience has no meaning, so we have decided to talk about Amy's Awesome Summer now, in the dead of winter, several months later (it's not procrastination on blog-writing if you can make up a reason for it!)

We've talked a little bit about our adventures in west Texas before on the blog when discussing field work, so this probably sounds familiar. But for those of you just joining us, here's the Big Scoop on Big Bend. 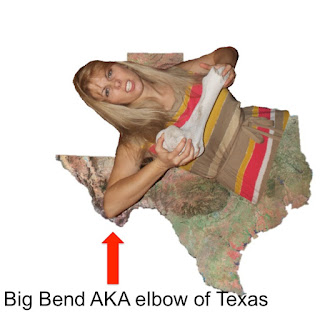 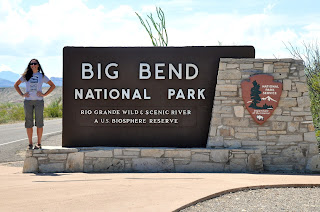 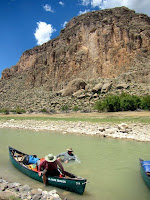 Big Bend is the region of Texas carved out by the Rio Grande river, which also serves as the border between the United States and Mexico. It's rather ironic that our current pres wants to build an insane wall where nature and millions of years worth of limestone have already accomplished the task, but in a gorgeous and gonna-kick-your-ass sorta way. The park covers more than 800,000 acres, including the Chisos Mountains as well as the largest protected area of Chihuahuan desert. The park geology is absolutely amazing with textbook examples of faulting, volcanism, and mountain building. Amy was lured to Big Bend by the beautiful landscapes, but she decided she wanted to stick around after hearing about the Big Bend fossil record.

The Big Bend fossil record spans more the 130 million years from the Cretaceous when west Texas was under the Western Interior Seaway until the Ice Ages when mammoths and saber tooth cats prowled the modern landscape. Obviously the part with the mammals is way cooler than that old shit, but for whatever reason the park still loves to talk about the Cretaceous. YAWN. 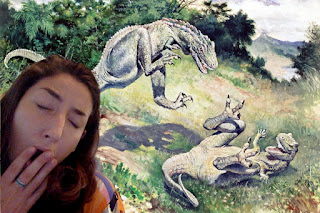 So why was Amy out there in the first place?! Big Bend National Park and the Big Bend Conservancy were preparing for the opening of a beautiful & huge Fossil Discovery Exhibit in the park, which officially opened in January of 2017. The park needed some help preparing the website and park newspaper for the event, and that's where Amy came in. Amy had been to Big Bend only two other times before this two month internship, and that was to exclusively do Eocene paleontology fieldwork, so she was super excited to finally have some proper time to explore this amazing park.

The Vengeance Team LOVES fossil mammals. Sometimes we are downright obnoxious about it. But here's a little secret: Amy really loves all paleontology, especially National Park paleontology. As Amy was already familiar with the Eocene aspect of Big Bend paleontology, she spent most of her time exploring the older Cretaceous rocks, finding ammonites, shark teeth, and crocodile osteoderms. That's one of the things that makes Big Bend so special: it encompasses 130 million years of geologic time, including a vast diversity of environments from shallow marine to volcanic highlands all rich with fossils.


West Texas is a unique spot - geologically, but also in pretty much every way you slice it. Let's just focus on the geology/paleo for now (we don't wear Prada, even Marfa Prada). 130 million years ago during the Cretaceous, Big Bend and pretty much everything to the north, was under water. This was the Western Interior Seaway, a broad shallow sea formed from subsidence as the Sevier orogeny took place to the west.

Big Bend's seaway inhabitants included mosasaurs, sea turtles, giant fish like Xiphactinus, ammonites and belemnites, snails, and more shallow marine organisms (all they care about are looks). This environment persisted in the Big Bend region from 130 until 83 million years ago, and is now recorded in the vast limestone outcrops around the park. The Boquillas Limestone, one of the last deposits of the seaway in Late Cretaceous times, is Amy's favorite formation to prospect for fossils from this marine ecosystem. Ammonite and belemnite fossils filled in with calcite crystals are common and gorgeous.

Wanna see this environment and cool fossils on a hike in the park? A beautiful huge ammonite fossil can also be seen in the rock of the Hot Springs Canyon trail along the Rio Grande.

The rest of the Cretaceous record of Big Bend belongs to the dinosaurs and other freakishly large ancient reptiles. By about 80 million years ago the Rocky Mountains had started their uplift to the northwest and the Western Interior Seaway began to shrink. Big Bend went through stages as a coastal floodplain, then an inland floodplain, until the seaway disappeared completely. During the wetter, coastal times the Aguja Formation was deposited, along with the bones and teeth of the giant alligator Deinosuchus, originally discovered in the park by Barnum Brown and R.T. Bird. When we say giant, we mean flipping giant. Sharks, turtles, snails, and dinosaurs such as hadrosaurs and the horned Agujaceratops also lived during the Aguja times. The Aguja Formation outcrops along the western portion of the Chimneys trail, keep your eyes pealed for chunks of bone!

At the end of the Cretaceous, 65 million years ago, the Javelina Formation preserves the fossils of the huge long necked sauropod Alamosaurus, the jaw of a Tyrannosaur, and the humerus of the largest flying creature ever discovered, the pterosaur Quetzalcoatylus. While the exact iridium layer indicating the K-Pg boundary has not been discovered yet, the late Cretaceous and early Paleogene fossils indicate that the famous dinosaur extinction event is recorded within the rocks of the park.

Then the dinosaurs finally died so FUCK ALL THAT CRETACEOUS BULLSHIT cuz it's MAMMAL TIME! After the Cretaceous a cleared plate is now present in Big Bend for mammals to dominate, and baby, do they. The next 65 million years of Big Bend fossil record is full of mammals. The early mammals of Big Bend lived during the Paleocene-Eocene Thermal Maximum (PETM) and the Early Eocene Climatic Optimum (EECO) when temperatures were high and semi-tropical rainforest covered much of North America. Big ole' Coryphodon, an "ungulate-like" mammal with no extant modern relatives likely chilled in the lakes and swamps. Early horse fossils have been found from this time, along with turtles and crocodiles, and pleisadapiforms (wannabe primates, still cute!). The true primates that Amy is obsessed with appeared a little later, during the middle Eocene. Most of the Eocene rocks in the park can be seen in the colorful hoodoos and spires of the Tornillo Basin, the Fossil Discovery Exhibit is actually on the first recognized Eocene fossil locality in the park! This is the time period Amy & Meaghan study and where they've done fieldwork in the past. Amy & her boyfriend Kelly presented this awesome research on the paleoenvironmental reconstructions from this time at the GSA meeting in Denver this past September. 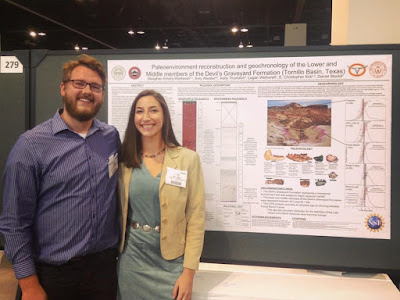 Mammals continue to thrive in Big Bend throughout the Cenozoic, though the climate cools and becomes increasingly arid over time. Grasslands spread and rhinos live with Meaghan's muse the oreodonts. Saber-tooth carnivores and, yay, even more turtles are around at this time! Mammoth fossils have also been found in the youngest Pleistocene deposits of the park.

Now we know you are all thinking, "OHEMGEE, this sounds like the dopest park ever!" And you are correct. The Vengeance Team encourages everyone to get out to Big Bend, or another cool park closer to you, and to learn more about the paleontological history of Big Bend and get info on the upcoming Fossil Discovery Exhibit, check out the website Amy spent her summer obsessing over! If you follow us on Instagram, we bet you'll recognize some of the photos.

The Fossil Discovery Exhibit consists of 5 exhibit rooms filled with murals and fossil casts that walk visitors through time from the marine environment to the volcanic highlands when mammals ruled. The mural artwork is done by none other than amazing paleoartists  Julius Cstonyi (who you might remember reading about in one of our earlier interviews) & Alexandra Lefort . Two huge bronze skulls of the mega-gator Deinosuchus and T. rex are designed to be touched and enjoyed by people of all ages. There's even a rad kid's* area with a walk-through dinosaur ribcage and boulders to climb full of fossils. The exhibit is located 8 miles north of Panther Junction on HWY 385 and is a self-guided experience, open from dawn until dusk. FYI: no water is available at the exhibit.

Go check it out! Tell us what you think! Show us your hilarious Deinosuchus selfies! And more importantly, please do your part to protect our parks! Please? Maybe tell Donald J Trump to unfreeze federal hiring also -  we hear he responds best to tweets.

Amy would like to thank the Big Bend Conservancy, the Houston Geological Society, and the NPS for making this paleontology internship possible. It was INCREDIBLE!