What do Ivanka Trump and Microsoft have in common?

They're two groups that claim to want more women in STEM but are not being very damn helpful about it.

Let's start with Ivanka. She's made her dad sign the Inspire Act and the Promoting Women in Entrepreneurship Act, laws that dictate NSF and NASA need to work to get women and girls interested in science (assuming that they somehow aren't already).  Simultaneously, she stood by as her father cut the budget for education in general, scrapped funding for the biggest science-funding organizations in the nation (aka our federal government), and froze national hiring of federal science positions, ensuring that this year's crop of graduates are even more screwed in their career search than normal. Personally, we don't see the damned point in getting women into STEM, if you then ensure they can't get jobs afterwards.

Yet on top of cheering for ladies in STEM while her father works to eliminate their career paths, Ivanka has shown little to no understanding of how equity barriers work.

Here are two of the fun things she's said in public:

1) Just Getting More Women in STEM Will Close the Gender Wage Gap
Haha, that's cute Ivanka, but no. This is a common application of the myth that the gender gap is caused by women choosing lower-paid positions: if we just get women to choose STEM careers, they'll make more money. In reality, men and women in STEM are offered different starting amounts. Salary in faculty positions is inequitable, and it has nothing to do with their degree, or the choices a woman has made that doom her earnings potential: it's called structural barriers and discrimination.

2) Getting More Women into STEM Is a Problem of Low Female Resilience
Please excuse us while we throw up a little bit. Encouraging women to "beat those statistics and advance the role of women in STEM fields" is putting the burden and the blame of gender inequity on women. It suggests that women aren't a larger component of STEM fields because they have chosen to give in, have displayed minimal backbone. Women can't hire themselves - they can apply, and apply, and apply, and no matter how much gumption they have, everyone's career still depends on someone else hiring them, someone else promoting them, and someone else paying them. The lack of women in STEM is not because of a lack of women trying hard, but people in power not trying hard enough.

Also, we're going to segway hard right into a brief rant about WHAT THE FUCK MICROSOFT


It's relevant, because this is the same fucking argument of Ivanka's: it's not us, it's you! It's you dropping out, it's you not making the cut, it's you letting serial sexual harassment, bias, and assault chase you away from this career! It's you not being strong enough to follow your dream, it's you it's you it's all on you #STAYINSTEM.

Stop ignoring systematic bias. Stop directing women to work harder, while leaving the system the same. If you want more women in STEM, address sources of wide-spread bias. Train your hiring committees on unconscious bias - it helps (well, sorta sometimes)! Tell both girls AND BOYS that anyone can be a scientist, and give both of them excellent female role models to prove it. Hire a female Bill Nye/Neil DeGrasse Tyson (HI WE ARE GREAT WITH EXPLAINING SCIENCE TO STRANGERS BTW SO PUT US ON TV RIGHT NOW PLZ). Pound male scientists in the skull until they stop showing a biased response to studies on gender bias. If you're in charge of paying a scientist, make sure you're paying them equally for equal work. If you're a peer reviewer, don't be biased against female authors. If you're writing a letter of recommendation, pretend you're doing it for a man. If you're in charge of promoting a woman, remember that their teaching evaluations are biased against them too.  Try not to sexually assault women or sexually harass women, in the field or otherwise. 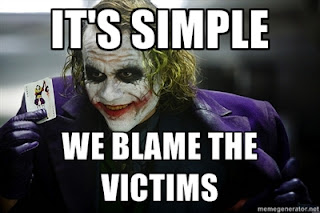 Don't tell women that they're the problem for not putting up with this shit. Change the system, not the women; change the problem, not the victim.
Posted by Mary Anning's Revenge at 5:56 PM