Meaghan Wrote a Paper on the Pleistocene

The glory of working with oreodonts, other than that they're super cute and really freakin' abundant, is that there's also not that much published literature on them. Being a person who'd rather pluck out her own eyeballs then read a paper that takes too long to get to the point, this is a boon for Meaghan. Unfortunately, Meaghan once had a bright idea that she should write a paper about the ice age, and so has spent her time wading through the swamp of too many goddamn papers as a result. 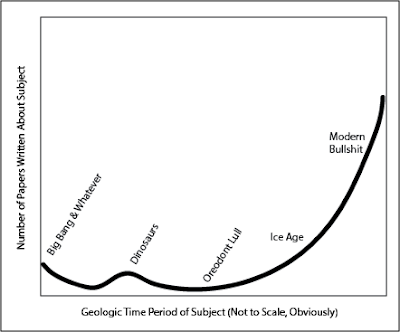 That paper is finally out now, and since it is out that means it went through many levels of peer review, and since it has gone through review that means that Meaghan now despises this paper with every fiber of her being, and if the mammoths came back she'd hunt them to extinction HERSELF.

Not the ground sloths though, for obvious reasons.

Anyway, the point is, Meaghan's got a new paper out: Spatially explicit analysis sheds new light on the Pleistocene megafaunal extinction in North America. Despite her current loathing for it, it's actually pretty cool. And for the next three weeks, it is open access! So you should go check it out. Brief non-science-speak highlights include:

Introduction/Methods:
* Back in the Pleistocene, aka the ice age, the globe experienced a big old extinction event where lots of animals, especially the large ones, got wiped out
* The ice age megafauna extinction in North America is hard to figure out cuz humans showed up on the continent at the same time that the climate was changing
* Other people have tried to look at this, but geography + temporal data can be hard to mix

* Meaghan & Co-Authors figured there was a way to make a heatmap (graphical representation of data where individual values are represented as colors) of the extinction, and of the first arrival of humans, and that would get around the geography/temporal issue
* There was, it's called interpolation. We used kriging, a subtype of interpolation.

Results:
* Our crazy cool maps say it wasn't all humans
* Our crazy cool maps also say it probably wasn't all directly climate, either
* In some spots, humans and megafauna were high-fiving for millenia (or coexisting, whatever)
* In others, megafauna went extinct before folks showed up
* Like basically, what our crazy cool maps say is "super highly regional"
* and also, for some reason our data didn't support humans having come down from Beringia, but that's probably because the ocean rise swallowed our data
* and finally, please stop spending so much time and resources on mammoths and mastodons, we know enough about them, let's get some more camels and sloths k thanks
* and maybe figure out why it took so long for megafauna to die out in the Great Lakes or in the Mexico/Texas region, because as we've said, Meaghan doesn't want to read more ice age papers+

So yeah, get out there and read it now while it's hot! (haha get it cuz it talks about climate change?)
Link:

Posted by Mary Anning's Revenge at 9:32 AM