In Defense of Duck Dicks

The apocalypse isn't here, but the sequester is, and sometimes it feels like they're one and the same. Funding has been cut across the board, and has hit science in all of its beautiful, beaker-filled places. Recently there's been a twitter blow up about one particular scientific project that received funding when so many others did not: Richard Prum's research into duck dicks. For those of you not familiar, we have already briefly discussed the wonderful world of the corkscrew cock; now we feel the urge to defend the research behind it. 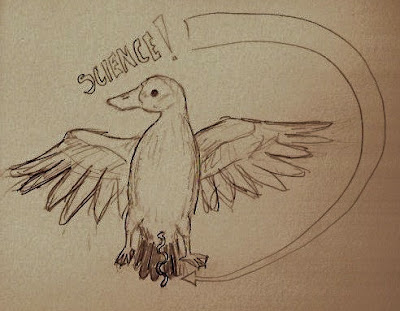 So let's talk about boners. Whether you have one, like 'em, or find them somewhat disconcerting, chances are that you see the reasoning behind not wanting to have needles stuck inside one. So with a dearth of human volunteers, the biomechanics of tallywackers have to be studied in cadavers and in animal subjects. Just do a google scholar search on Armadillo penis and you'll find scientific filth for days, filth that was funded not because people really cared too much about the state of erections in armadillos but because of the implications it could have for human beings.

Ducks are one of the few birds that have erections, and those erections are craaaaaaazy. Studying them could easily lead to many advances in trouser snake morphological studies. But if that doesn't convince you that we should be funding research into duck boners, let the Vengeance Team toss out just a couple of possible outcomes and research offshoots this science could create.


Male ducks can get erections within seconds, often as they are copulating. Research into distributive shock (shock caused by dilation of the blood vessels and resulting drop in blood pressure) could take dramatic steps forward from figuring out how ducks spontaneously pop a full-on erection.  Distributive shock can kill you, ergo, duck dick research could save your life.

Only 2-4% of rape attempts result in a fertilized egg in females ducks. A lot of this is due to anatomy, as far as the current research dictates, and while lady humans might not sign up for corkscrew vaginas in order to avoid pregnancy (consensual or otherwise), further research could certainly show a hormone that causes abortions in the case of unwanted duck fetuses - potentially a hormone that could have similar effects in human beings. How will we know, unless we look for it?

Duck penises extend to 8-9 inches in the summer, and shrink to less than an inch in the winter. Yeah, we're pretty positive you can see the obvious benefits to figuring that one out. But there are other potential benefits too - what if that mechanism could shrink or expand other pieces of our anatomy... like say our muffin tops or bellies?

These are just a few of the numerous possible offshoots and side-hypotheses research like this can generate. It's happened in the past - at first glance it may have seemed strange and pointless to research a tree, but the Pacific Yew Taxus brevifolia was found contains the chemotherapy drug paclitaxel (taxol) that is used in breast, ovarian, and lung cancer treatment. Have you ever received any sort of injectable medicine? Chances are you have, and you can thank the Atlantic horseshoe crab, Limulus polyphemus for preventing any bacterial contamination of your medicine. Horseshoe crab blood contains amebocytes (and is also a beautiful blue color), which play a similar role to white blood cells for vertebrates in defending the organism against pathogens. Amebocytes from the blood of L. polyphemus are used to make Limulus amebocyte lysate, which is used by pharmaceutical companies to detect bacterial endotoxins.

The fact is that sometimes when we explore a scientific phenomenon, we're not sure what we're going to find. The answers to common problems don't always lie in the common sphere, or we would have already solved them. Is it possible that this research will turn up nothing more important than some interesting facts about duck schlongs... just like research into new cancer treatments will just turn up some poisonous shit we can't put into our own bodies. Grants are awarded on the basis of many factors, including the quality and competence of the researcher behind the proposal and potential for furthering research within a field, not solely for the potential uses towards humankind. Otherwise unexpected advances like this might not happen.

So instead of hating on certain scientists' grant success in this dark time for research funding, lets be grateful for the scientific advances we have made, and be optimistic about the cures of the future. And in the meantime, write to your government representatives to let them know that we need to fund science if we want to fund progress, even if it does mean we learn a lot more than we ever expected to about duck dicks along the way.

UPDATE: Patricia Brennan, one of the lead scientists in this research project, has written a fantastic article about the value of her research. Check it out!
Posted by Mary Anning's Revenge at 5:56 PM

Email ThisBlogThis!Share to TwitterShare to FacebookShare to Pinterest
Labels: corkscrew cocks, funding, how are we always writing about penises, sequester