A Moment of Silence for Omomyids

There's plenty of good news from Vengeance Team North - not only has Amy not been eaten by any bears, her Honors College thesis is officially printed and turned in!  Now that the thesis process is over, Amy has made herself quite comfortable in the Alaskan wilderness, focusing on Cretaceous age organisms including, of course, dinosaurs. As absolutely stoked as she is for this exciting new adventure in life, Amy is also finding herself sad to be leaving (for the moment at least) her beloved omomyids. In order to mourn the commencement of this project and properly move on, Amy has decided to cathartically explain the fantasticness of omomyids. And you should pay some attention because this shit was funded by a very competitive national scholarship, therefore solidifying what Amy has long known to be true: cuteness is a fascinating and intriguing scientific phenomenon.
Other than cooing about how cute omomyids are, Amy spent her senior year using phylogenetics to explore some of the evolutionary patterns of this group.

Phylogen-what-now? some of you may be saying (we have a substantial readership in the shocked-grandma demographic). Despite what it sounds like, phylogenetics isn't the science of wrapping extinct organisms in flaky and delicious phyllo dough crust and devouring them. It's actually a type of research that shows the evolutionary relationships between organisms. It's the science of creating meaningful family trees. Many of the scientists who do phylogenetic research are biologists who use molecular sequencing data that they extract from living creatures. Contrary to Jurassic Park, fossils are A) super dead and B) usually lacking DNA, so how do paleontologists use this particular toolset? 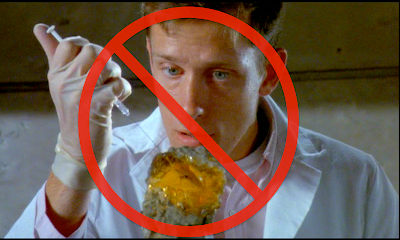 Instead of using the code itself (DNA), we use the things it codes for (characters). Researchers have determined different characters of different bones that help distinguish different species. These characters are compared and assessed until a (or many) phylogenetic tree(s) are produced. A phylogenetic tree is a visual representation of the relationship between critters and the different nodes represent the known or unknown ancestors of the creatures in question.
The great thing about phylogenetic trees is that they let you track changes in organisms over time and see if there are any trends. It also gives a good picture of when and how diversity changes in relation to climate, competition, and other factors. Amy specifically looked at diversity of these adorable fuzz balls, trying to see if there was a directional change in body size or feeding strategies, and how diversity changed in relation to climate.

To answer her many questions she needed lots of data, gathered in part from scientific journals as well as measured by herself at museum collections including the University of California's Museum of Paleontology in Berkley. Lots of research has shown that in primates, the first lower molar gets bigger as the animal gets bigger, so she used that tooth to tell her the size of each species (or in science-speak, she used m1 as a proxy for body size). Omomyids were pretty damned small, so Amy spent a lot of time cooing into a microscope while looking at and measuring  hundreds of tiny, tiny (super cute) teeth.


The result of over a year of work was a series of graphs that would probably bore you to death (maybe that's what killed the omomyids?) so let's focus on the good stuff.


The major conclusions* of Amy's study were that climate change did NOT drive omomyid taxonomic diversity (there are more of them, and more different types prior to the climate changing) nor did it affect the evolution of body size, as omomyids didn't show trends towards smaller or larger body sizes. Climate did, however, play a role in what omomyids were evolving to eat. Amy found that climate change explained about 25% of the variation in omomyid feeding ecology, which is really really awesome.


You: "Um, guys, that seems not that cool? Also, why haven't there been any dick pictures in this post yet?"

Shh, readers, let us explain and then you can go back to frantically googling animal penises. Climate change affected the diet of these delightful and unfortunately dead primates. Our current climate seems to be throwing shit fits lately (see various hurricanes and the fact that coral seem to be marinating in their own dead body juices). Many primatologists are worried how this will affect endangered primates. Amy's research indicates that the climate may disrupt and alter the feeding ecology of organisms that live in similar ecological niches as omomyids (such as tarsiers, slow lorises, and other disgustingly adorable small mammals) and conservationists need to be alert and on the look out for diet changes and food availability changes as our weather chaos continues.

To save living primates we need to continue to understand why past primates went extinct, and make better conservation efforts based on that knowledge.  We can help save the most cuddly creatures on the planet, and that my friends, is super fucking awesome.


*Amy ain't telling all her secrets here, that's what the hopefully soon-to-be-published paper will be for. Sorry suckers but you're just gonna have to wait.