We hope you're ready, world.

You're probably not, though, because this blog post contains scientific sketches of cupcakes and there ain't nobody prepped to handle that shit. Let's delve deep into the world of paleopedology baked goods, a sentence that by all rights should never have entered this universe but is somehow here anyway.

Mollisols are grassland soils. Because grass forms a thick blanket of vegetation on the ground, it creates a lot of organic material (chocolate cake and white cake mixed together). Mollisols often have calcareous nodules ("pearl" sprinkles) and gypsum layers (silver sprinkles), but also have crumb peds which are basically small lumps of dirt inside the overall dirt. Here we have a well-drained mollisol - the small Bt horizon  wasn't constantly soaked with water, so instead of turning green it oxidized (rusted) into a reddish layer, or in this case, red velvet cake.

This one comes with a super epic cooking video, in which Meaghan pronounces 'calcareous' the Canadian way (aka... incorrectly).

Disappointingly, Meaghan's camera battery died soon after that video was filmed. The rest of these cupcakes shall have to stand without explicit, Star-Wars-style cooking directions.

Peaty, swampy, nasty soils, these are formed in the sort of environment Meaghan has no desire to travel to. These are the coal swamps, and the salt marshes, and the regular marshes - basically any place with gooey soil, scratchy plants and nasty mosquitoes. Some of our best examples of these are from the Carboniferous, when we saw huge expanses of swampy forests. Here you can see a very thick organic layer (chocolate cake) on top of a clay layer (green dye + white cake). That second greenish layer is what happens to waterlogged soils; the technical term is gleying, and it's the opposite of rusting, but is equally as bad a thing to have happen to bikes. Below that there's a bedrock; in this case, it's limestone (white cake).

Now this is Meaghan and Amy's sort of vacation spot! Hot, barely rained on, and usually starkly vegetated - the aridosol is the soil typical of deserts. This particular aridisol has an unusually thick B horizon (white cake), the top of which has so much calcrete ("Pearl" sprinkles) that it's actually formed a pretty continuous layer. This was an accident - Meaghan just put in so many sprinkles they just melted together, but it does happen in older desert soils too, so... accidental science success!

We've also got a thin A horizon with organic compounds and minerals in it (chocolate cake and white cake mixed together), and of course a solid C horizon (yellow cake). Because desert soils aren't very productive, they take longer to form and so the C horizon doesn't get as mixed or broken up as it would in say, an Oxisol.

Vertisols are made of swelling clays; when you add water they swell, but when they dry out, they shrink. Do yourself a favor, and don't build on these*. All that soil motion causes huge cracks, which sometimes get filled in with other sediments and preserve in the soil as it turns into a rock over time. These cracks are called mukkara, and only form when the climate is very seasonal and has dry and wet spells.

Formed in humid, hot environments (ie, where sloths live), the Oxisol is the ultimate rainforest soil. Huge amounts of rain erode the soil, leaving little in the way of an organic layer but LOTS in the way of red clay. These guys are often found with root traces or drab root halos, which are basically the ghosts of roots with unsettled business (IE: decayed root matter).

The biggest key to IDing an oxisol is the thick clay layer (represented here by red velvet cake). Sometimes they also have calcerous root nodules ("pearl" sprinkles) but these form pretty deep in the soil, having been washed down pretty far by the rain.

Sometimes when a volcano erupts, it spews out delicious ash instead of scalding hot lava (yay?). This ash contains plenty of nutrients that break down pretty readily. Andisols are great for growing things... until the volcano erupts again, that is.

Sure, lots of people don't like the idea of soils on Mars because there's no evidence of modification via organisms. However, Greg Retallack taught us in our paleopedology class that a soil is just sediment modified in place, and by that definition Mars definitely has soils. Weird, weird soils. There's some blue-gray rocks in some blue-gray silt and clay, all covered by a feruginized (reddened) rind. Unlike on earth, that reddish tint wasn't caused by oxygen - it was caused by photons interacting with the soil. Conversely, that silt and clay was probably formed by climatic regimes similar to Earth: at some point, there was rain on Mars, and there was enough of it to make silt and clay. 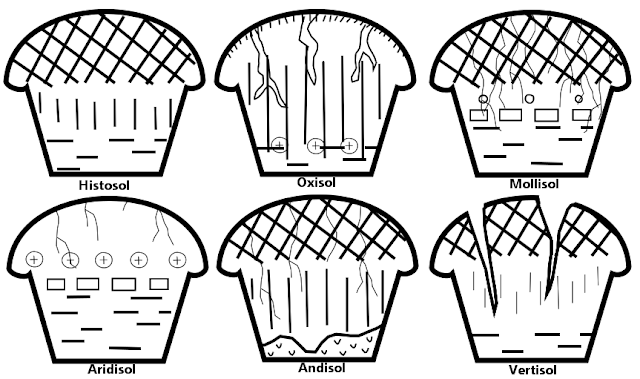 In conclusion: Meaghan needs to concentrate harder on classes/research/interpersonal relationships, and less on drawing scientifically accurate cupcake diagrams. Also dirt, when made of cake, is pretty delicious.


*Thanks to Mindy Homan for the tip about Dinosaur Monument originally having been built on swelling clays!