In our continuing quest to force our readers to aspirate their own vomit, we have decided to present you with photos and descriptions of a squirrel dissection that Amy and her boyfriend Kelly participated in a few weeks ago. Many paleontologists shy away from the fleshy bits, but not us: we celebrate in the goopy, meaty, nastiness. In fact, while Amy had many spectacular experiences this summer working at the Murie Science and Learning Center at Denali, one of the best days of all was when Dr. Link Olson came to visit and bought with him a cooler full of frozen red squirrels.


In case you haven't already bailed out with pre-emptive stomach acid in your mouth, here is your official warning: It is well known in the scientific community that staring at defleshed bodies of small animals can cause the thoughts "OMG it's so cute!" to pop into your head, which is a thought you can never unthink while looking at a photo of a corpse. NSFW.

Prof. Olson helps his students with projects on small arctic mammals including the red squirrel, Tamiasciurus hudsonicus. The point of documenting and sampling everything is because these are all museum specimens. Not only will Dr. Olson's students benefit from researching these little guys, but also visiting scientists from all over the world can visit the University of Alaska Fairbanks Museum of the North and gather all sorts of data, whether it be on size variations, genetic sampling, or reproductive cycling. Amy and Kelly were cheerful volunteers in this very important process; Meaghan right now is examining the skulls of camels and sheep acquired and prepared in a similar manner.


Red squirrels are about 11 to 13 cm in length and can be found chattering away in most spruce forests across Alaska and across a wide range of North America. They spend a lot of time gathering and storing spruce cones and preparing for winter. While most people like to consider than harmless cute vegetarians, the truth is much more opportunistic.

“Red squirrels are a real pain in my neighborhood,” Olson told Amy and Kelly. “With the increase of bird feeders their numbers are exploding and they are the main predators of songbirds and snowshoe hares.”

The chipper little squirrels that have harassed Amy by the side of the trail for months are cold blood killers?? Bring on the scalpel.


All five of the squirrels were caught around Olson’s home near Fairbanks. They were either shot with a 22 or caught in a live trap and then killed by thoracic compression. “Thoracic compression,” Olson explained to Amy, “is a very simple and concise method. You use your hands to compress the lungs and the heart simultaneously, it only takes about 7 seconds.”

Because these red squirrels are being recorded for scientific purposes there are a lot of things that need to be written down. Before you even delve into the guts and gore, there are 4 things to record: full length, tail length, back foot length, and weight (lengths in millimeters and weight in grams). Note that information like "predilection for killing songbirds" and "adorableness on a scale from 1-10" are also very important but quantitative measurements for those don't exist yet (fortunately Amy's still looking for a topic for grad school). 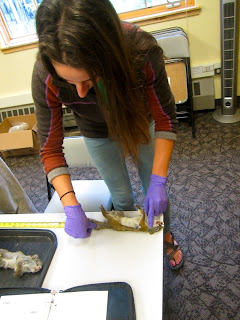 The skin itself is useful, and so it's important to peel it off in as few pieces as possible (think snuggie, not jigsaw). To do this effectively, the legs come out first. They are removed one at a time through a slit in the stomach. Then out comes the tail, which can be rather difficult to pull out.

Then, like a tube sock, you pull the rest of the flesh off your squirrel sample. The head is kinda tricky, a scalpel comes in handy to get around the eyes.

As a side note, Amy and Kelly’s sample was blessed with the largest testes of the group. Squirrel junk is an interesting thing, and not just to squirrels. When the males are sexually active their nuts get huge and internally the testes get little vertical white lines when they are filled to the brim with swimmers. Amy's guy had more lines than Robin Thicke's Beetlejuice outfit. One of the other squirrels was also male but not sexually active- the nuts were so tiny they were almost impossible to find.Think about that! What if your junk swelled from itty bitty (like a few mm diameter) to the size of your femur?? It was like Amy and Kelly's squirrel had surgically attached a set of truck nuts to itself, while the other had self-gelded.

Female red squirrels are only sexually receptive for one day*. Most of the time lady squirrel vaginas are corkscrew-shaped, but on that one special day their lady bits straighten out and then they are on the man hunt. Note that the following photographs do NOT have anything to do with this phenomenon; that's the praying mantis' schtick, not squirrels'.

Once the skin was off it was time to tear the guts out and cut off the excess flesh. Muscles aren't particularly useful, but an organ sample was needed from each specimen, Amy and Kelly put the spleen and part of the heart in a vial with the specimen I.D. number attached.

Once all possible meat has been removed, Olson sets the corpses out to dry out for a bit and then feeds them to the bugs! Dermestids are awesome little beetles that looooove to eat the flesh off of bones. “The bugs don’t like all the guts and excess meat, they like the bones meatless and dried,” Olson told the crew. So less sushi, more jerky. Gotcha.

Olson also gave us a glimpse into his personal philosophies about the somewhat morbid job:

“I try to eat at least one sample of every animal I skin,” he said with a glance at the corpse on the table. “Squirrel isn’t so bad but I’d rather eat my underpants than eat hoary marmot ever again.”

While this may seem a little gross, these collections are incredibly valuable for biologists and paleontologists too. They help us to measure variation within species, which is what Meaghan is doing right now, but can also theoretically be a valuable source of information about change in species over a very small time scale. Meaghan is personally pretty grateful for people who collect and donate dead animals to museums, and the people who then clean and catalog them - her dissertation would be nothing without them. If you are a hunter or a fisher and have bones you'd like to donate, please feel free to contact Meaghan or Amy and we will put you in contact with the University of Oregon's Museum of Natural and Cultural History and make sure those donations are put to good use.

*it isn't groundhog's day. That's not what that means, and that is dirty Meaghan.


---------------------------
Now, we understand from our google search keywords that many of you came here looking for Cock of the Day or Squirrel Intestines, but why not subscribe to our blog anyways? We promise you, if you think this is the only dissection we're going to post about, or the only time we're going to discuss testicles, you haven't perused our other offerings. To stay updated with all the horrible things Meaghan and Amy think are a good thing to write about in the public forum, try following us on  facebook, or twitter, or the red-headed stepchild of social media, google +! We're much more likely to write bad jokes about squirrel sex if we think it'll make us internet-popular.
Posted by Mary Anning's Revenge at 7:15 PM