The Summer in Paleontology

The summer is stuttering to a premature end as it always seems to do. In Oregon, everything is still smoking from fire east of the mountains and the leaves are all turning west of them. In Alaska it's snowing and they've begun to experience the phenomenon known as "nighttime." With school looming on the horizon for Meaghan, and 30 Days of Night coming for Amy, it's time to prepare: Winter is Coming.

But if you've been climbing in a cave or out on the mountains all summer like the Vengeance Team, you may need a quick catch-er-up on all the important goings-ons that went-ons while you were out of cell service. No, not that stuff about the hiccuping murderer or the fact that Bill Nye is busting a move on Dancing with the Stars. No, we're talking the really important stuff: Paleontology. Because what's more news-worthy than things that have been dead and stagnant for millions of years, right???

1) So Some Hooplah Went Down With The Mammal Family Tree 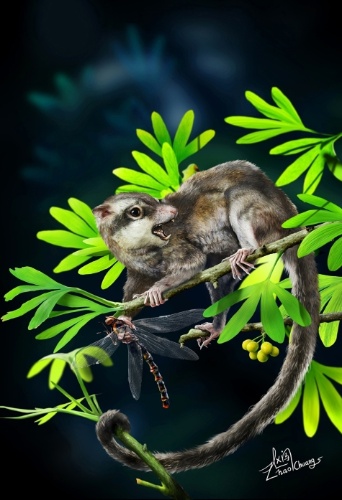 The Goods:
Okay so here's the thing about humans, we are totally self involved so we really wanna know when mammals first evolved (probably because the dinosaurs give us a bit of an inferiority complex). Previous research has discussed all sorts of these really really old proto-mammal things out there, creatures that kinda blur the line between mammal and mammal's uglier step-cousins, and that includes the order Haramiyida. These creatures were previously only known from a couple teeth and jaw fragments, but now that's changed. Recently, two research papers came out in the same journal with conflicting dates for the emergence of the mammalian tree, as well as conflicting identifications of Haramiyida.

The Players:
One group, led by Jin Meng from the AMNH, claimed that their new fossil discovery is, in fact, a Haramiyidan and that Haramiyidans were mammals. Their fossil was named Arboroharamiya, and based on this new find, their study concludes that Haramiyidans first appeared 215 million years ago, marking the beginning of the mammal lineage.

The Controversy:
Now here's the best part: the studies are based on fossils that were found in the exact same formation in China. So, same formation, same group of organisms, same journal for publication, but 40 million year difference in emergence dates and opposite conclusions on what constitutes a mammal. Even better, the authors were unaware of the other's work which is super helping scientists' "bad communication" stereotype.

Vengeance Team Viewpoint:
Didn't they peer-review each others papers? As Sam Hopkins (a professor at University of Oregon and one of Meaghan's advisers though Sam hates to admit to that in public) put it, "put those specimens in a box and drive on over there!”

The horns are by far the largest of any ceratopsian, giving Nasutoceratops a look more like a Texas Longhorn than a dinosaur. The nose is also more robust (Amy's preferred adjective for her own schnoz) than any other ceratopsian dinosaur, though it probably didn't help this dinosaur's sense of smell any.

The Players:
Paleontologist Dr Mark Loewen, from the University of Utah and Natural History Museum of Utah.

The Controversy:
Nasutoceratops was found in close association with other herbivorous dinosaurs, including two cousin Ceratopsian species as well as hadrosaurs. Dr. Loewen points out that "all of these animals are upwards of three tonnes... You have an environment where you have all of these large herbivores competing for food. We aren't really sure how you can support all of these animals, but you do find them all in the rock at the same time."

Vengeance Team Viewpoint:
Look! Another dinosaur find! ...How does this affect omomyids or oreodonts? Oh, it doesn't? Wait, why could an ecosystem support tons of huge-ass dinosaurs, but only a handful of millions of years later it couldn't support a single oreodont? The Goods:
In case you've been living in a cave (ooh, cool! says Meaghan), these days the popular theory among scientists (viciously rejected by all 6-year-olds) is that T. rex was a scavenger. Yup, a big ol' bald eagle with itsy bitsy arms. Oh yeah, in case you didn't know, bald eagles are scavengers too.

The Players:
University of Kansas paleontologist David Burnham and Robert DePalma of the Palm Beach Museum of Natural History (real museum, not about thongs).

The Controversy:
They found a broken T. rex tooth in a hadrosaur vertebrae. LO! THE T.REX HUNTS ANEW! Most importantly, there are signs that the bone around the vertebrae healed: the hadrosaur lived to see another day.

Vengeance Team Viewpoint: Perhaps this find really just points to T.rex being a super bad predator; no wonder it was mostly a scavenger, that'd be an embarassing fail for any self-respecting dinosaur. Not being about to take out Ducky? Shameful.


4) Life on Land Gets Earlier. Much, Much Earlier.

The Goods: In the world of small organisms, there is this horrible Goldilocks phenomenon where some things are too small for the microscope and too big for the naked eye. Dr. Greg Retallack found the paleontological equivalent of this, in soils that are 2 billion years old.

The Players: Retallack is a paleopedologist at the University of Oregon. He is very sassy, and seems to take a sincere glee in making other people mad by proving them wrong... sort of the pee-in-the-kiddie-pool approach to science, if that pee was just adding something that other people didn't like very much and would like to believe wasn't true (so... exactly like pee.)

The Controversy: Key words to this are soils and 2 billion years old. Just wikepedia "oldest life onland" and you'll find that land plants are found... 450 million years ago. That's .45 billion years ago, if you're bad at years. So... this is a bit earlier, then.

Vengeance Team Viewpoint: Retallack may be well known for some pretty out there hypotheses, but the man is pretty much personally responsible for make paleopedology the science it is today. People weren't buying his science back then, either, but like the dirt he studies, the evidence in support of his many radical claims begins to accumulate over the years. We'll give this one a little more time to settle before picking a side... but he'll probably be right.

The Goods: They found some dinosaur-aged feathers trapped in amber. No, this does not mean Jurassic Park is finally here.

The Players: A group of scientists from Calgary, Alberta.

The Controversy: Actually, this one could finally clear up some controversy. For a while there's been a big majority of scientists who studied dino fluff and said they could tell some things about the colors, and a small minority that said "oooh but that's just a bacteria not a color-containing cell organelle!" or "nuh-uh you're picking up chemicals from feather decomposition!" This will hopefully lay some of that to rest. Also, potentially some odd protofeathers were trapped too. Of course, now we get to argue whether the feathers were dinosaur or bird until the end of time. Yay.

Vengeance Team Viewpoint: Amy would really like some jewelry made out of this feather-filled amber. Meaghan would too. Also, both of them would like oreodont and omomyid fur to be found now please!


And most importantly, in Amy's oh-so-humble opinion: 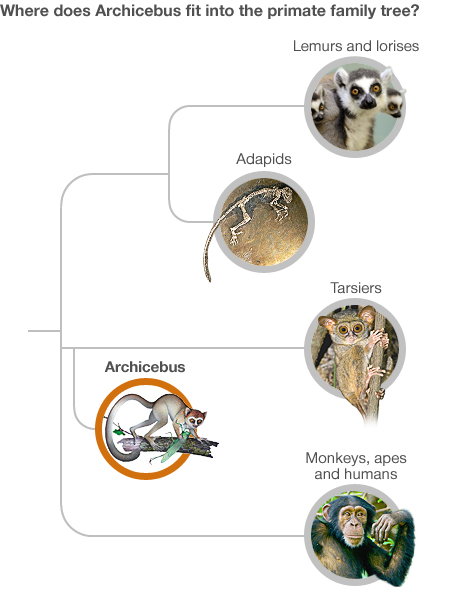 The Goods: The Archicebus fossil is preserved in two slate slabs with the majority of the animal's key bones being preserved in excellent detail. This allowed scientists to infer that this early primate lived approximately 55 mya, was very small in size, highly active, probably lived in trees and ate insects. While Archicebus has been placed on the primate tree as a ancestor to tarsiers (and therefore omomyids oh yeah!), it is not on the same lineage as humans. That being said, it represents the earliest known member of our broad family tree and therefore everybody and their mom is stoked about this find. Except for intelligent designers, but they spend their life being bummed out about new fossil finds.

The Players: Dr Xijun Ni and his team from the Chinese Academy of Sciences, Beijing, China.

The Controversy: Though Archicebus has been placed at the base of the tarsier lineage and not the anthropoids (monkeys and apes) it has a calcaneus (heel bone) that is more reminiscent of an anthropoid, not tarsier. This indicates that the common ancestor of tasiers, monkeys, and apes had features in common with tarsiers, monkeys and apes (mind blowing), and Archicebus is evidence of that.

Vengeance Team Viewpoint: Amy is more than stoked to learn about another possible study specimen for her research on early adorable primates. The report claims Archicebus was an insect eater, and we all remember how much Amy loves reconstructing the diversity of feeding ecologies in omomyids, right????

UPDATES ON VENGEANCE TEAM RESEARCH:
Meaghan continues to understand how entirely fucked up oreodonts are and has submitted her first paper. Since it was to the Journal of Vertebrate Paleontology it then subsequently was unsubmitted for formatting errors, which she fixed (sorta), unsubmitted again for formatting errors (EM DASH WILL YOU NEVER LET US REST?), resubmitted, and either the editors are playing that game your cat plays ("when will I bite your toes? the anticipation makes it sweeter) or it's officially going to get looked at for content instead of commas now. Very exciting. She's also preparing to present a poster at the Society of Vertebrate Paleontology about oreodonts, camels, sheep, and general osteological sadness since it turns out these three things suffer from a lot of genetic variability that makes identifying them a hassle.

Amy has found dozens of new dinosaur tracks in Denali as well as some beautiful leaf fossils. She was also lucky enough to join researcher Dr. Fiorillo and his crew in the park that resulted in many significant finds including therizinosaur and ankylosaur tracks. She has completed her GeoCorps responsibilities, including an ArcGIS project where she created a new fossil site prediction model for the entire park, and she will be presenting her work in a poster this October at the GSA annual meeting in Denver, CO. She also has a poster presentation at SVP, but because of the unfortunate scheduling of both meetings and because she's super poor, Amy won't be making it to SVP this year. Her omomyid poster will still be on display and her stunt double (aka coauthor Edward B. Davis) will be there to represent.

Divided we will conquer the nerd-fests!!!

Email ThisBlogThis!Share to TwitterShare to FacebookShare to Pinterest
Labels: Amy and Meaghan Are Basically Better Than Everyone, big nosed dinosaurs, paleontology, protomammals, so hot right now