Yes, that is a fossil not a sedimentary rorschach diagram - in fact, it is a cartilaginous fish. Our very own patron saint of paleontology Mary Anning found this bad boy in the early 1880's. Mary Anning sold the fossil to John Nash Sanders, but either she hadn't found the tail at the time that she prepared the fossil, or simply hadn't finished prepping it, but either way Squaloraja polyspondyla was originally described sans its tail, and sketched by Mary Anning as follows: 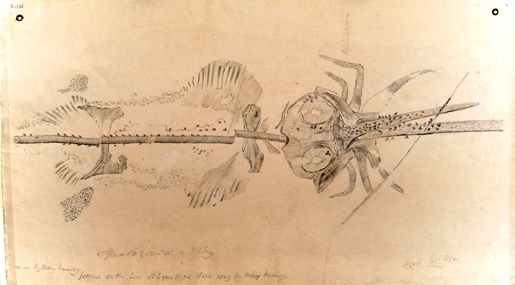 The body and tail were never reunited. Sad times... except that the body got asploded during the Bristol Blitz, and so the tail was the only part that survived (being housed elsewhere at the time). So yay?


So why was Squaloraja such an important find? Mary noted that the specimen shared characteristics of both living sharks and rays, causing general confusion. Remember how everyone thought nothing went extinct back then? Now we know that it is a member of the Order Chimaera (ratfish), one of the oldest and most diverse family of cartilaginous fishes. The closest living relatives of Chimaera are ratfish, though cartilaginous fish  split nearly 400 million years ago. Squaloraja showed up around about 200 million years ago, and it should not be too surprising that, considering its ancestry, it looks like a shark/ray hybrid critter. While epic in appearance, the Squaloraja lifestyle was pretty tame; it was a bottom feeder that lived in shallow marine settings.

The Vengeance Team shares a little place in their hearts for cartilaginous fishes, especially since their Vertebrate Paleontology class. While studying the evolutionary history of fishes (fascinating mmhmm zzzzzz) they realized something, cartilaginous fish had bones, but then they lost them! Sharks and chimaera stem from bony fish ancestors (see shark family tree below) and some of these guys had bones. This means sharks and rays secondarily lost bones in favor of cartilage, oh snap. Ray Troll beautifully illustrates the evolutionary tree of fish. Squaloraja would fit in up by the Chimaeras.