GSA was full of its fair share of tummy aches, talks where squinting was the only option, and hilarious, fabulous geology. First off, I finally physically met my mentor, Kate Zeigler!
Our meeting in person was almost more than the geology gods could handle, but we fortunately weren't struck down and made into fulgurites (heh) as we dined on burgers and milkshakes. I could finally ask some questions that are hard to phrase over email ("Erm soo paleomagnitude... that's like, yeah, basalt points north? Poles switch and it blows my mind?") I also got a chance to grill her on some hard hitting paleo-questions which will be featured in an upcoming Vengeance Team interview (Meaghan guest stars and wow, what a guest she makes...).

I hadn't realized how much I had in common with Kate, who has been my mentor through the Huffington Post Girls in STEM program from afar for a few months. We have plans to rock climb in New Mexico whenever my skin becomes so pale that the SW sun is the only cure to my vitD deficiency. 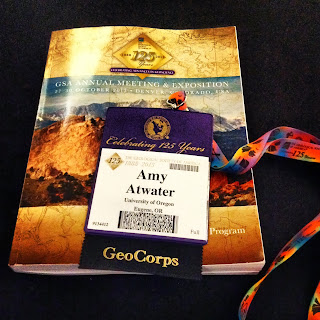 Summary: Back in the day Cuvier defined mass extinction events based on the Pleistocene Megafaunal extinction: the largest land herbivores died out and the top predators took a big hit, too. He also noted that the largest freshwater dwellers like turtles and crocs, as well as small terrestrial species, suffered very little in comparison. Now zoom to Texas: The Arroyo Formation in Texas is mid Lower Permian in age and has been hypothesized to record a Cuvier style extinction, so says Everett Olson in the mid 1900s. He noted that the two largest land herbivores, diadectids and edaphosaurids, were common before the extinction and completely absent from the strata dated after the event.

Bakker and his team set out to investigate the signal in the Arroyo Fm in order to determine if Olson got it right. Bakker says, yes, yes he did. Bakker began with a hilarious intro, "Good GSA meeting but I wish there were more hats" he said with a huge cowboy hay comfortably resting on his noggin. He referred to diplocaulus as "boomerang heads" throughout the talk and repeatedly complimented Baron Cuvier's fantastic head of hair (see picture to the right). Bakker also called the diadectids the "pin-head" vertebrates in the Permian of Texas, and claimed these early vertebrates were starting the trend for the state's politicians.


Bakker concluded by stating that the early Permian extinction was, in fact, a Cuvier style extinction, but that he has his doubts about the following P-T extinction event. He doesn't see the same signal at the P-T and believes it was caused by something totally different. He ended with his opinion, saying it was "something biological. A disease, parasites, or, alien big game hunters. Thank you and are there any questions?"

Worst Talks:
Unfortunately every year there are a handful of talks that literally make everyone squirm or worse, fall asleep. Here's what folks do wrong during these painful 12-minute torture sessions:


POSTER SESSIONS!!!
Poster sessions are a great time to learn new science and also network your fanny off! I had a great time touring around the different posters at GSA and finding the occasional paleo-poster to geek out on. Pro tip on posters: assume your audience is full of academically well-versed but easily startled deer. If it's too loud, or too complicated, you'll scare them off. Coax them in with a visually appealing, well-spaced and uncrowded poster. Color-blocking is not just for clothing!

The conference was incredible with thousands of geologists wandering about, it made one think about all the brain potential within that  convention center. Socializing is half the point of attending conferences and I enjoyed my fair share. There wasn't an official U of O alumni event, but that didn't stop a group of us from hitting the streets and looking for drinks.  The surrounding restaurants were too packed for another group of ten, so we eventually made our way to the only bar with space: Coyote Ugly. At first I enjoyed the bizarre cultural experience, but watching young women dance on the bar (at 7:30 pm) for their audience of two dirty old men quickly lost its appeal. While I was grateful to hang out with friends, I doubt I'll return to Coyote Ugly will be any time soon.

I'll have to admit that my favorite day of the conference was Sunday, when I wasn't at the convention center at all. Instead I joined my paleo-savvy relatives on a trip to the Dinosaur Ridge tracks in Morrison, CO. This incredible track site not only records behavioral information about dinosaurs in the hundreds of tracks preserved there, but also is home to the Dakota Ridge hogback, a section of rock that spans the K-T boundary. On the other side of the hogback is the Dinosaur Ridge Bone Quarry, discovered in 1877 by Arthur Lakes. Between holding hands with dinosaurs, walking through millions of years of geologic time, AND enjoying some much appreciated sunshine, it was a great day for a paleontologist.

Email ThisBlogThis!Share to TwitterShare to FacebookShare to Pinterest
Labels: advice, Amy and Meaghan Are Basically Better Than Everyone, dinosaurs, GSA, kicking ass at conferences, posters