Warning: this is not a trailer review, though Hopeful Monsters does sound like a cinematic masterpiece. Rather, this is a discussion of a form of evolutionary theory: Hopeful Monster (or Discontinuous Variation if you prefer the dry scientific term, and who doesn't) is the hypothesis that suggests evolution proceeds through the same mechanism that basketball athleticism has: organisms who used to be a bit odd and possibly insanely tall now find their niche, excel, and rise to the top.


We all know and love Charles "the Big D" Darwin, who quite obviously changed the face of evolution forever with his theory of evolution by natural selection, but let's review a few of Darwin's assertions about his then-controversial theory:


1) Evolution is a two-stage process with random variation as the raw material and natural selection as the directing force.


This is what the world was working with in the early 20th century and there wasn't much wiggle room in the scientific community. But in 1940 a geneticist by the name of Richard Goldschmidt published a little book entitled The Material Basis of Evolution and boy oh boy did it make a splash in the world of science. He argued that the only way powerful enough to generate new species is through discontinuous variation, or macromutations. To Goldschmidt, Darwin's Evolution-Fu was not strong enough: evolution wasn't a gradual elevator, it was a goddamned escalator. Goldschmidt believed that the neo-Darwinian view of gradual accumulation of small mutations could only account for variation within a species and wasn't powerful enough to explain new species.

Goldschmidt admitted that the majority of these macromutations would be disastrous and lethal to the organism. These he called "monsters." But, Goldschmidt believed, in the right conditions eventually a macromutation would occur that could be beneficial for an organism. This mutation would adapt an organism successfully to a new niche in life, which he referred to as a "Hopeful Monster." His early research in embryology supported his hypothesis that new species will occur by the rare success of these hopeful monsters and not by an accumulation of small changes within a population.

Many Neo-Darwinians rejected Goldschmidt's hypothesis and for years it was the butt of genetic research jokes. Critics linked the phrase "hopeful monster" to the non-Darwinian notions of immediate perfection by dramatic genetic change. People said macromutations would be too harmful, a hopeful monster would never survive. And, most importantly, said the critics, if by chance one hopeful monster survives, how the hell would it find a mate?!

But slowly, oh so slowly, the tides began to turn. Gould pointed out in 1977 that the fossil record does not support gradualism and frequently lacks transitional forms - not because they hadn't been found, but because he believed they never existed. Now studies have shown that developmental macromutations in rate genes or controlling genes can change early development and thus cause large effects in the adult phenotype. As an example we take the axolotl, or Nature's Festive Albino Salamander.

Axolotls exhibit neotony: instead of growing up, they stay in their larval phase forever and breed that way (it refuses to ever metamorphose into an adult and pay its damned bills). Page et al. 2010 classsified the Axolotl as a hopeful monster because it exhibited an adaptive and derived mode of development that enabled it to stay in an aquatic environment. This adaptive mode is quite prevalent among other Tiger Salamanders - there are plenty of Peter Pans in this genus.

As another example, most rodents have internal cheek pouches for food storage except for those in the
Geomyidae or Heteromyidae families, who have an external, fur-lined pouch. Charles A. Long studied these pouches for years, considered a vast array of preadaptive possibilities for the external pouch but rejected them all in favor of discontinuous transition, aka a hopeful monster: external mouse jowels were just a thing, until suddenly they were THE thing... adaptationally speaking at least.

And finally, we end with a quote from fellow scientist and friend Don Prothero that wonderfully sums up the current debate surrounding the Hopeful Monster hypothesis:


"The past twenty years have vindicated Goldschmidt to some degree. With the discovery of the importance of regulatory genes, we realize that he was ahead of his time in focusing on the importance of a few genes controlling big changes in the organisms, not small-scales changes in the entire genome as neo-Darwinians thought. In addition, the hopeful monster problem is not so insurmountable after all. Embryology has shown that if you affect an entire population of developing embryos with a stress (such as a heat shock) it can cause many embryos to go through the same new pathway of embryonic development, and then they all become hopeful monsters when they reach reproductive age"  - Prothero, 2007

So why all this chat about hopeful monsters? Well, it's an interesting hypothesis, and one that has caught the attention of scientists in a lot of different fields.... and the attention of our favorite paleoartist, Ray Troll, who has given us permission to display some of his brand new art about Hopeful Monsters. Ray first heard about the hopeful monster hypothesis from the University of Oregon's very own Dr. Samantha Hopkins when he visited back in 2012. This isn't the first time Sam has inspired paleoart, remember Meaghan's horny rodents? And the mention of Hopeful Monsters caught the attention of the imaginative Troll, who started daydreaming about these hopeful monsters soon after. Where did they come from? Were they so ugly they were cute? And most importantly, was that a face only a mother could love? We present to you the NEVER BEFORE SEEN artistic result of this scientific curiosity: Hopeful Monsters by Ray Troll 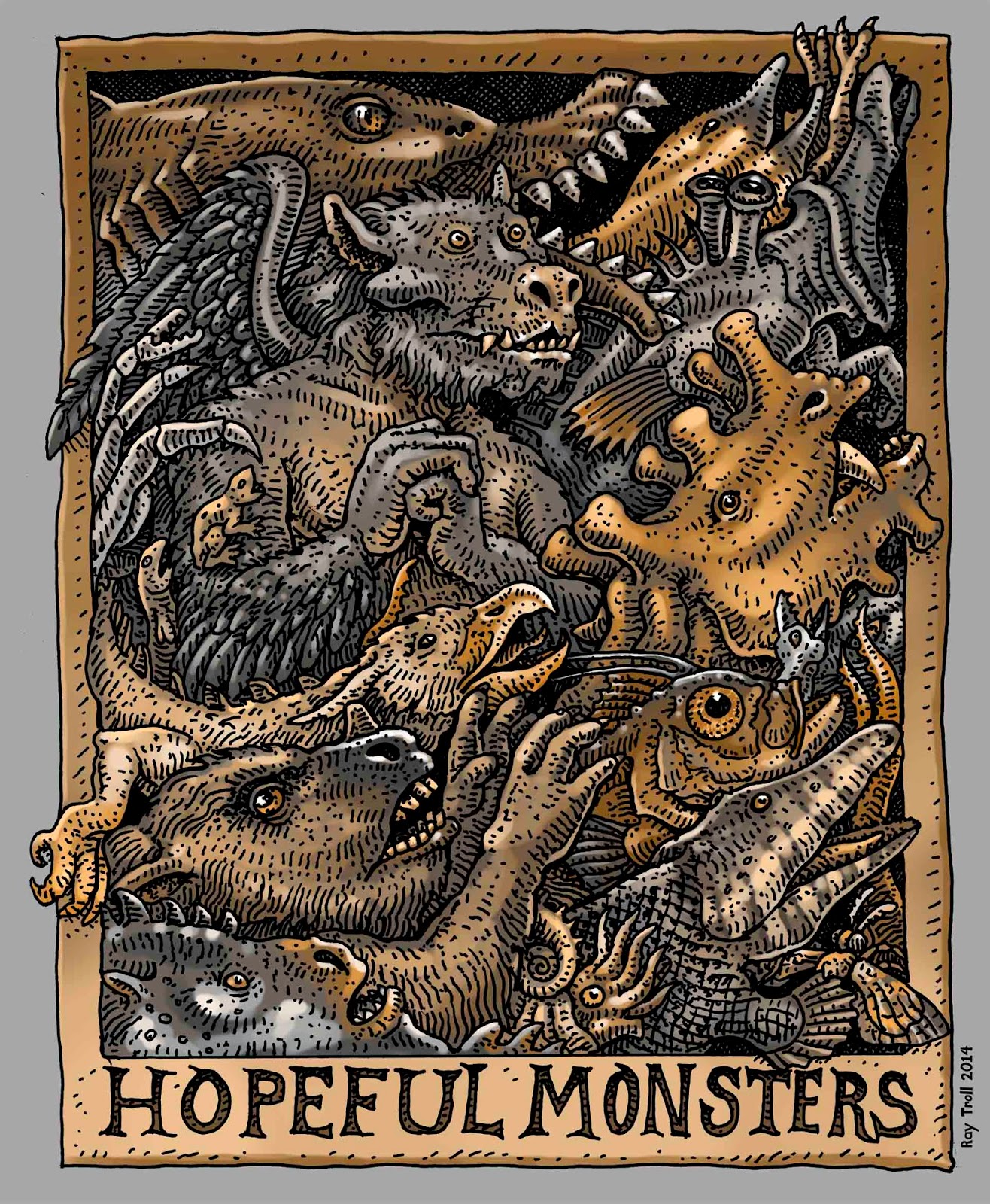 We are proud to debut Ray Troll's new paleo art here at Mary Anning's Revenge and we hope that you the viewer enjoy getting the exclusive first look. All we ask in return is a little information: WOULD YOU LIKE THIS DESIGN ON A T-SHIRT??? That is the question that Troll and the Vengeance Team are discussing at the moment and we need your opinion. Are there enough paleonerds out there to justify the printing costs? LET US KNOW!! Please tell us if you'd like to see this print available on a t-shirt via the comments on this post, you can email us at maryanningwritesback@gmail.com OR let us know on our Facebook page.


Bowler, Peter J. Evolution: the history of an idea. Univ of California Press, 1989.

Long, Charles A. "Evolution of mammalian cheek pouches and a possibly discontinuous origin of a higher taxon (Geomyoidea)." American Naturalist(1976): 1093-1097.

Prothero, Donald R. Evolution: What the fossils say and why it matters. Columbia University Press, 2007.