Normally when you see "bronto-" as a prefix it's safe to assume some stupid effing dinosaur shit is about to go down, but NOT TODAY SATAN.

"Bronto" simple means "thunder" and today we are not talking about some trivial thunder lizards, we are talking about the ten times cooler mammal version, the brontotheres. Also known as:


We would also like to take this moment to point out that brontoTHERES (1872) were named before brontoSAURS (1879) so while that's not such a big deal everyone should just know that thunder beasts are hip as fuck. Supposedly brontotheres earned this name because of the Sioux indians who were the first to discover the skulls of these bizarre-shaped megafauna. They believed the bones were from the these giant creatures who produced thunderstorms when running over the clouds and referred to them as 'thunder horses' (pretty on point considering brontotheres, like horses, are perissodactyls). The first white guy to look at the bones was none other than our titty-loving friend, Leidy. He examined a partial mandible found in 1846 in South Dakota and named the fossil Palaeotherium proutii. 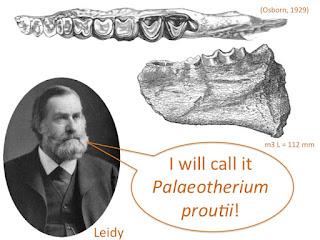 It was Marsh who came by 2 years later and recognized the fossils as perissodactyls and probably said something like "I got more fossils of this shit. I'm calling it 'brontothere'  because it is just such a cool name plus I'm thinking of using it for this partial dinosaur skeleton that I have lying around and maybe I'll just dip my toe in the 'bronto' water and see how my paleofan girls like it."

Now they are called brontotheres. But sometimes titanotheres. It gets confusing thanks to one of Amy favorite paleontologists, Henry Fairfield Osborn. Yes, Osborn, who once identified a pleistocene peccary tooth as a new species of human which he called Hesperopithecus, or "Nebraska Man", also made a mess of other extinct mammals. With brontotheres, Osborn went into full-blown "NAME ALL THE THINGS" mode, which was a common way of doing paleontology in the early 1900's. Osborn wrote two giant volumes on "The Titanotheres of Ancient Wyoming, Dakota, and Nebraska" and split brontotheres into eleven subfamilies (now we recognize three [Milhbachler, 2008]). He was a fan of the name "titanothere" over "brontothere" which is probably where most of the confusion between the names comes from.


ENOUGH HISTORY, more PREHISTORY! Who are these thunder beasts and why are they so weird?

Brontotheres lived during the Eocene (56 - 34 million years ago) of Asia, North America, and one weirdo brontothere who went through a goth-vampire stage and was found in Romania (no fangs, capes, or evidence of sparkling have been found yet, though). Brontotheres are probably best known for being really big and for having large frontonasal horns that protrude from the anterior portion of their skull (see below). They look vaguely rhino-like, but aren't rhinos. The earliest brontotheres like Palaeosyops and Eotitanops; however, were quite small and lacked the face horn. Brontotheres are also characterized by having a short face (portion of skull anterior to the orbits) and a long skull. They also are united by their unique bunoseledont dentition.


The Perissodactyl Family Extant and Extinct 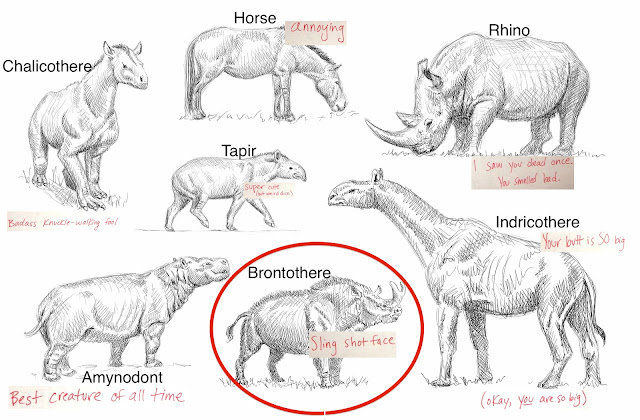 But we don't really know how brontotheres relate to everybody else in the perissodactyl group. Were they part of Ceratomorpha, along with rhinos and tapirs? Or in the poorly named-Hippomorpha which contains no hippos, just horses? Or perhaps they were neither - it's still not really clear.

We also don't really know where brontotheres originated. The earliest true brontotheres in North America (Eotitanops borealis) lived during the same time as their Asian counterparts (Eotitanops pakistanensis), both appearing approximately 52 million years ago. This would be a bit easier to discern if we knew which groups brontotheres were most closely related to, but this is currently debated.

Beard (1998) disagrees. Beard supports an Asian origin for brontotheres as part of his "East of Eden" hypothesis in which North America serves as the cul-de-sac for multiple inoculations of mammals from Asia. His support for this origin is the Asian fossil Danjiangia pingi, who he claims is the sister group to brontotheres (Beard, 1998).

The Vengeance Team supports the eastern European hypothesis that brontotheres were really just vampire rhinos from Romania who took over Asia and North America until early felids wiped them out by evolving pure silver canines (Atwater, pers. com. 2016). We feel this is the most realistic version presented thus far.

To summarize thus far: We don't know to whom brontotheres are closely related and we don't know where the hell they came from. Brontothere identity crisis is real. 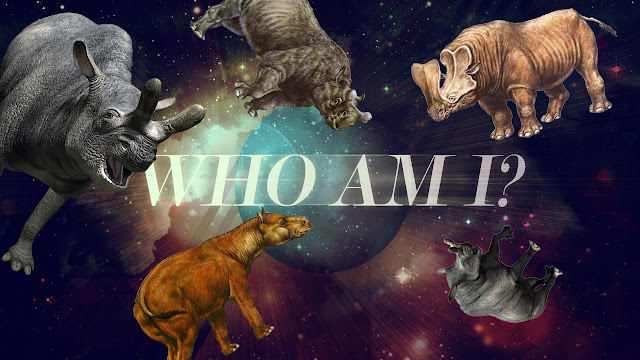 The horns of these later brontothere genera are sexual dimorphic. The horns are larger in the presumed males. Brontothere horns resemble the secondary sex characters that are commonly seen in modern sexually dimorphic ungulates, like the antlers of deer and horns of bighorn sheep. This sexually dimorphic trait may represent a polygynous mating system and a gregarious form of social behavior for the brontotheres. This means a whole herd of brontotheres probably did sound a lot like thunder. While brontotheres may have been social, this doesn't mean they were always nice to each other. The large horns seen in later brontotheres such as Megacerops and Embolotherium have been hypothesized to have been used for headbutting or ramming during male-male combat.

Brontotheres were really cool, alright?!? That's all the science we've got, but here are some more nerd photoshop collages for your enjoyment:

Beard, K. C., 1998. East of Eden: Asia as an important center of taxonomic origination in mammalian evolution. Bulletin of the Carnegie Museum of Natural History. 34, 5-39.