So Meaghan just got married (more on that in a future post) to a lovely gentleman named Logan whose family owns a farm down in Roseburg, Oregon. And on that farm they have wine grapes and apple trees and coyotes and a surprising number of cougars, and most importantly... sheep.

And this spring, those sheeps had lambs, and Meaghan fell in love. She spent every weekend down at the farm snuggling lambs that really didn't want to be snuggled, and petting ewes that didn't want to be pet, and having a grand old time. And now, we're going to do a photo and informational deluge about everything Meaghan learned about sheep that you should know to make your lives better. First off, the breed of sheep on this farm are Suffolk and Dorset ewes, with Suffolk Rams. The Dorsets are good mamas, and the Suffolk ewes are either batshit insane about their lambs or keep looking around and being surprised there's some sort of mini-me following them.

None of the sheep have horns, nor are they particularly intimidating, but Meaghan was head-butted by one and also many of them very angrily foot-stomped at her so she felt pretty bad-ass and terrifying. All of the sheep are cute, but only if they get their butts shaved on time because even Meaghan's rabid infatuation can't surpass the extraordinary number of dingle-berries that sheep get when they have wooly butts.


The ewes started giving birth in February. Typically you can tell they're about to give birth because they sort of wander off and then start doing this weird dance where they lay down, look at their butt, get up, look at their butt, then rinse and repeat. Sheep are the world's most permanently surprised animal, but they seem extra startled for the first 30 minutes of labor when they keep getting up and nothing has yet occurred. Eventually, the ewe delivers a water bag - it's essentially a huge clear water balloon that dangles out of their hoohah for a while before breaking, lubricating the vagina and signalling that the lamb is on its way aka MEAGHAN YOU SHOULD COME HANG OUT WITH THIS SHEEP FOR A BIT SHIT IS ABOUT TO GET REAL.

Did you know that lambs do uterine yoga? There's a whole series of recorded lamb postures, and some of them are not so great to deliver. If things are going well, the lamb is in full-blown superman pose, ready to come out and not tangled with a sibling. If things do not go well and the lambs are pretzled together, it can be impossible for the sheep to give birth. Farmers have developed a lot of weird techniques to help get lambs out of their impossible pretzel shapes, and these come complete with fun cartoons!

Once the lamb is out it's all kinds of goopy and fucked up looking, and the mama sheep has to eat the goop off which is probably the reason that humans evolved hands and nails honestly cuz eeeew. Though the sheep seem to get weirdly into it, and sometimes so into it they nibble off the tips of the lambs tails. Which is fucked up.

And yes, Meaghan did get to help pull a lamb that was stubborn (the one above!) out of a sheep's vagina. She and her soon-to-be mother-in-law got to pull one out together, it was really great bonding time. Meaghan did let her mother-in-law put her hands in the sheep vagina, because Meaghan was still an amateur and all and worried about stratching up a sheep hoohah with her nails or poking out the lambs eye or something. She still pulled though. It was pretty awesome.


Once the lambs are licked clean and struggling to walk it's prime time to catch the lambs and pull them into the barns. Why? Cuz they can't fucking run yet. Once they've learned to run, all bets are off. They're not like real sheep, which can be herded. They're like ADHD flashes of wool, darting all over the place and being just real jerks about it. So catch 'em while they're still not sure what legs are for, and carry them slowly towards the barn so the mama can follow.


After everyone's in the barn and Meaghan has realized she should stop snuggling the squirming lambs, then the mama and her baby or babies get to bond for a few days in a pimped out private pad aka stall. Sometimes the ewes don't like their babies and reject them, which makes ZERO sense to Meaghan who loves all of the lambs and would never give up any of them if her fiance wasn't making her walk away and do homework and shower and stuff. If the ewes won't let the lambs nurse, then sometimes people step in. Sometimes, those people are Meaghan and they're maybe too enthusiastic about that potential task. 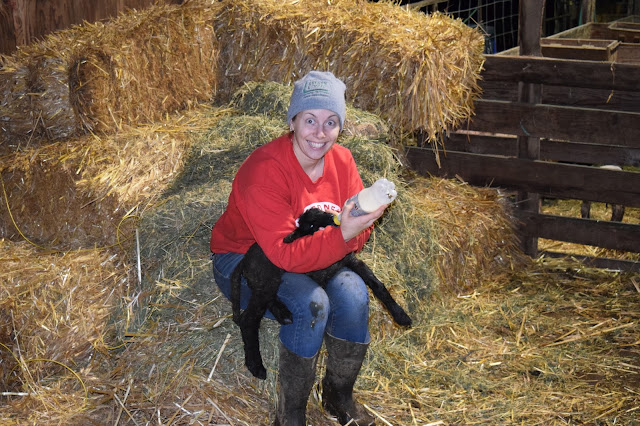 Once the lambs are stronger and their moms have decided to keep 'em (reluctantly or otherwise), then it's time to tag 'em, do a couple of medical things, and let 'em go. Since some of those things include shots, docking tails and also castrating the males, this is maybe a little less than pleasant for the lambs.

Thus cleaned up, the lambs and their moms are ready to go. Before they're released into the field, the moms are wormed, and also painted: on the shoulders if they have twins and on the butt if they have a single. As Logan put it, "they have two shoulders, but only one butt!" Meaghan did not explain the intricacies of the pelvis to him. 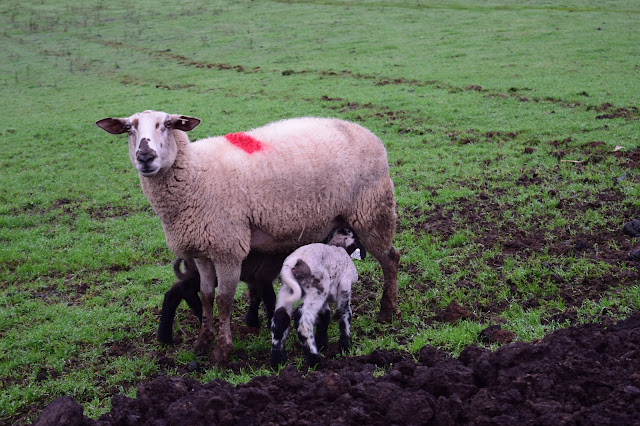 Out in the field, the lambs run along, play, and scream a lot and make Meaghan giggle. So to end this blog post, we have uploaded a few videos of lambs running around ridiculously. There's one ewe that seems to like playing too, which is adorable. Moral of the story is, Meaghan wants to have a bunch of sheep, so they can have lambs that she can snuggle.

Email ThisBlogThis!Share to TwitterShare to FacebookShare to Pinterest
Labels: castration, hobbies, lambing season, Meaghan is going to be a farmer, SHEEP