The hippopotamus is a misunderstood creature. Marketed as cute and cuddly (we mean, have you seen those cheeks?!) the hippo is actually one of the most dangerous animals in the world and also one of the worst to potty-train.

Male hippos are very territorial and the most successful male must defend his habitat with all his mighty bowel strength. To show dominance, they fling their own shit and urine around. The most impressive part is how they coordinate their tails to propel around during the deed in order to maximize poop dispersal. 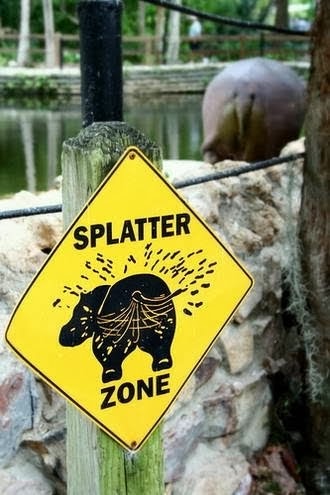 Bathroom talk is apparently a major turn-on for the lady hippos. Male hippos mostly use this shitty display for territory marking, but they have also been recorded using this same technique during mating season. The male will position himself where the female will get the best view, right in the splash-zone, and then he let's it rip.

If the female is impressed with this literal shit-show, she will allow the male to mount her in the water. Hippos pretty much do everything in the water, include give birth fully submerged (welcome to the world, swim to the surface or die!) so making poopy love is no exception. Doin' the dirty takes about 30 minutes for these bad boys, so the female must periodically raise her snout above water to get some air, and probably because the water doesn't smell so fresh. Often the male is so stoked to be gettin' it he wheezes and honks like a asthmatic goose losing his virginity.

Email ThisBlogThis!Share to TwitterShare to FacebookShare to Pinterest
Labels: 14 days of genitals, baby hippos are adorable, doing it dirty, hippo poo I love you, shitty situation