All too often the Vengeance Team spends our time talking about male genitalia, when there's a whole world of exciting ladybits out there, too! To mix things up today, we're still sort of talking about penises... but with a twist: we're talking about lady-dicks.

Female spotted hyenas dealt with the issue of penis-envy by evolving pseudo-penises that can swordfight just as well as the real deal. All females have this false penis that is traversed to the tip by a central urogenital canal, which allows the female to urinate, mate, and give birth.

Let that settle in for a second. They give birth through their pseudo-dicks. Tiny tiny channel, big baby hyena.


While the pseudo-dick deserves a double-take and looks almost identical to the males, this doesn't make the female hyena's any less "female." They are still genetically female, but with a clit that is 90% as long as a male penis and just as wide in diameter. The female possesses no external vagina, as the labia are fused to form a pseudo-scrotum. In the females, this scrotum consists of soft adipose tissue. Just like a penis, the enlarged hyena clitoris can become fully erectile, raising its head in hyena greeting ceremonies, social displays, games of rough and tumble or when sniffing out peers.

Not only do they have permanent she-wees, both males and females are also blessed with penile spines.Yes, little spikes on the base of the glans of their clits and dicks that make their sexual organs rough like sandpaper. Aren't you glad you're not a hyena?? 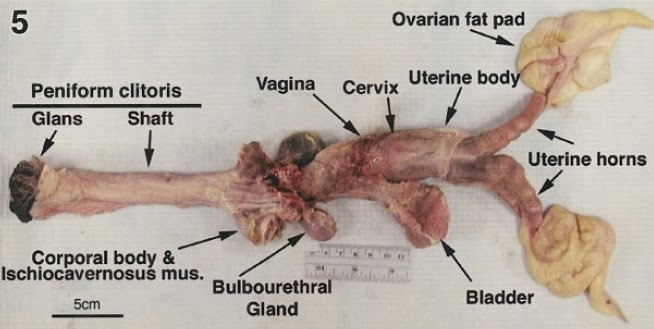 Male hyenas can't actually get to lady hyena's vaginas directly because they're blocked by the false scrotum and testes. They have to go in through the enormous clitoris, which has to be retracted first. This gives females a lot more control over mating in the pack, which is why they are one of the rare groups of animals where the females are in charge. Sounds pretty ideal... except for the birth-through-a-barbed-pseudo-penis thing. That still sounds pretty shitty.

Kruuk, Hans (1972). The Spotted Hyena: A Study of Predation and Social Behaviour. University of Chicago Press.