Ok, it's been a rough trip so far and everyone needs a little bit of a genital-horror break.

Cute, isn't it? This is Ranitomeya imitator, the mimic poison frog. That little pustule thing on his back is a baby tadpole hitching a ride. Cute, it isn't. But the mimic poison frog papa has clearly got some serious googly eyes for its own young, since it takes care of its tiny froglets for months at a time.


Because frogs don't have eggs with shells, their eggs are particularly prone to drying out and making tadpole jerky, which sounds kind of intriguing but isn't evolutionarily favorable for the frog. To compensate most frogs lay their eggs in wet soil or in bodies of water. Mimic poison frogs lay their eggs in small pools away from main bodies of water, often in the small pools of water contained in plant leaves (which are called phytotelmata). This avoids predation from other animals including the numerous species of predatory (and cannibalistic) tadpoles laid by other frogs. It does, however, mean that there is nothing for their own tiny, predatory and somewhat cannibalistic tadpoles to eat.

But don't worry! Mimic poison frogs have come up with some neat behavioral adaptations to get around the starve-or-be-eaten conundrum of  rainforest parental care. 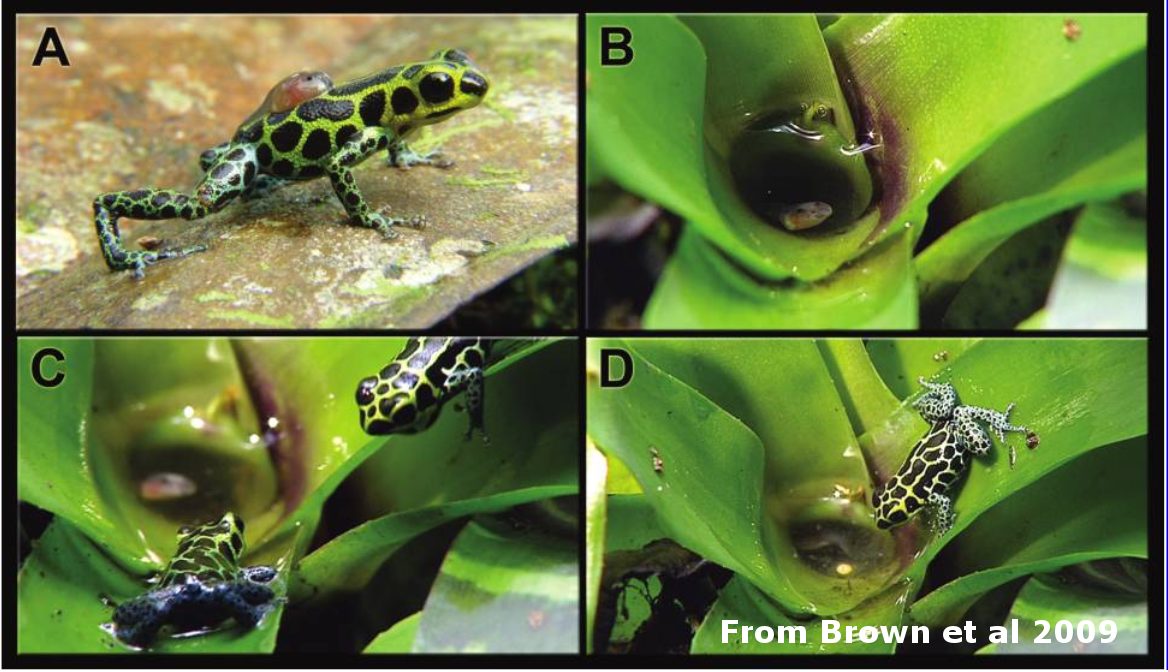 First off, mimic dart frogs are monogamous and they work together to take care of their babies. Once mom and dad have decided to make babies together, they find the right phytotelmata to lay their eggs in - typically with about 40ml of water in it. They lay their eggs without any funny business - simple amplexus, no tailed frog butthole sex here - and then they leave the eggs for a week (presumably to go to Jamaica on their honeymoon).

About a week later, papa frog comes home and hatches the eggs, then carefully carries each tadpole to its own little home. Because there is incredibly little food around, the parents spend the next few months taking care of them. The father frog wanders between his nurseries and signals to the mother if the tadpoles need some food. What does she feed them? Non-fertilized eggs!

So, to recap: Mimic dart frog tadpoles are separated so they don't eat each other, then they're fed unfertilized siblings anyways. This makes Meaghan feel a lot better about her relationship with her own sister; they may not always see eye-to-eye, but at least nobody has ever tried to eat the other one.

Let's move on. Though the frog below may look very similar, this is Ranitomeya variabilis, the Splash-Backed Poison Frog. It is also carrying around a tadpole, but splash-backed poison frogs are not nearly as concerned of parents as the mimic poison frogs.


Where mimic poison frogs are monogamous, the splash-backed poison frogs are horny little frog-fuckers, mating with as many ladies as possible. Both species will carry their tadpoles to other pools, but the splash-backed poison frog has no problem putting siblings in the same pool. With mimic dart frogs, if siblings are in the same pool they full siblings which may decrease their aggressiveness towards one another because of kin selection (a tactic Meaghan and her sister anecdotally DO NOT CONFIRM). Splash-backed pool buddies are at most only half-siblings; the fathers are more likely to put them in pools with siblings they are less related to. They also put them in very large pools (more than twice the size of those used by the mimic poison frog) Presumably this is because splash-backed mothers don't lay unfertilized egg meals for their young, and the splash-backed tadpoles get abandoned as soon as they're distributed. The only thing they have left to eat is whatever falls into their pool, or each other.

And that's Evolution, folks: some animals find cute ways to take care of their gelatinous larvae, and other animals just say fuck it and run off to have some more babies, just in case the ones they just deposited don't make it.

----------
This year's 14 Days of Genitals has become bizarrely frog-heavy. Guess we finally figured out that frogs are kind of weird. To hear more about frogs (since we now only talk about them), follow us on Facebook, Twitter, Google + or Instagram!
Posted by Mary Anning's Revenge at 5:00 PM