Out there lurking in the cold dark ocean are female octopuses with the coldest blood of all. Barracudas got NOTHING on these stone cold killers. 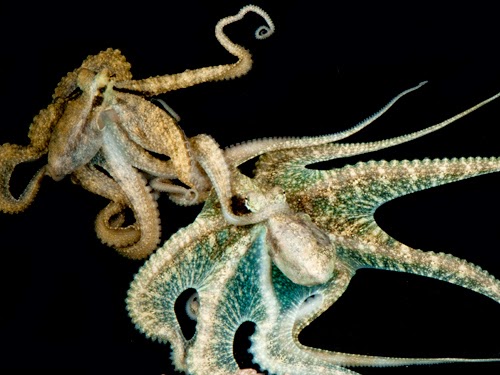 Octopus sex is just strange to begin with, all those tentacles and hormones swirling around - shit's naturally gonna get dramatic. The male octopus has a tentacle that is his designated "gettin' busy" arm and he places a nicely wrapped package of sperm on that sex arm and sticks it in a slot on the female's body for reproduction. But that's just the beginning. The sex tentacle BREAKS OFF within the female's body and that's it, no more dick for that octopus. He will never regrow his dick-arm and he will eventually die.

But in some species, death is reached much more quickly.

There have now been multiple documented cases of wild female octopuses mating with males, strangling them while they are still entangled, and then feeding off the carcass of their former lover for days. This research is startling on a few levels, but perhaps most shocking of all is how the hell an octopus, the animal that can use its wiggle witchcraft to escape through microscopic holes, could ever get strangled.

Huffard & Bartick 2014 observed a female Octopus cyanea, using the distal portion of an arm to form a loop around the mantle of another octopus, and then squeezing down in order to prevent the flow of water into the mantle and to the gills.
After she kills him the female octopus drags the body to her den where she feeds on it for a number of days. Ah lady octopus, bringing a whole new meaning to the term "dinner date." Guess this Valentine's day you should be grateful you aren't the main course.

Email ThisBlogThis!Share to TwitterShare to FacebookShare to Pinterest
Labels: 14 days of genitals, babe I'm gonna eat you, octopus cannibalism, oops my dick broke off in your vag slot