14 Days of Genitals, Day 2: Dance for your Life

Jumping spiders are the teddy bears of the arachnid world - they're small, fuzzy, and like to launch themselves at you for hug attacks. 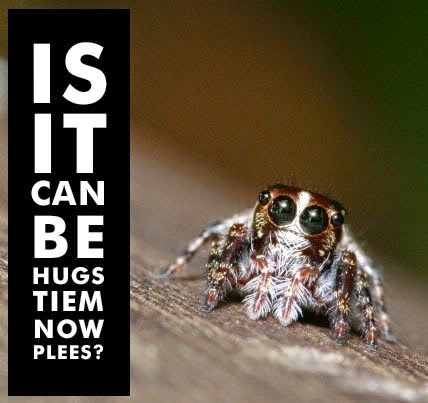 In addition to being really, really cute (SUCH BIG EYES - AND SO MANY OF THEM!) they are also really skilled at dancing. That's how they impress their mates - via solo dance routines that put Sia's mini-me to shame.
And as if that's not cute enough, they also sing to their mates - a high pitched whine we can't hear until it's slowed down, which technically their lady loves can't hear either cuz they don't have ears. They simply have to feel those good vibrations, which are referred to in the literature as 'seismic signals'.

IMPORTANT SIDE NOTE: does that mean that earthquakes are just the Earth confessing its feelings for us??!

Intriguingly, some species of jumping spiders will vary their tactics - if they're outside and the lighting is good, the male will dance a lot - visual courtship. If they're inside the nest of the female where it's dark, the male employs non-visual tactics (singing and groping) instead. And if he finds a subadult female... he'll serenade her then move into her place and chill with her until she's of age - basically what we assume 13-year-old girls want from Justin Bieber.

Of course, this wouldn't be a proper 14 Days of Genitals post if there wasn't a downside. No, the downside is not "It's Spiders!!!" because spiders are awesome and that's not nearly terrifying enough for a 14 DoG post. The downside is that if the dude doesn't do a good enough dance, his potential mate will just eat him.


So remember that the next time you're in a club, human-dudes. The floor may be sticky, but at least your lady friends won't eat you for your shitty Night-at-the-Roxbury moves.

We'll leave you now with a Peacock Jumping Spider dancing to the greatest song of all time (barring any of our rap videos of course)... the YMCA.

Email ThisBlogThis!Share to TwitterShare to FacebookShare to Pinterest
Labels: 14 days of genitals, dance or die, jumping spiders have high standards